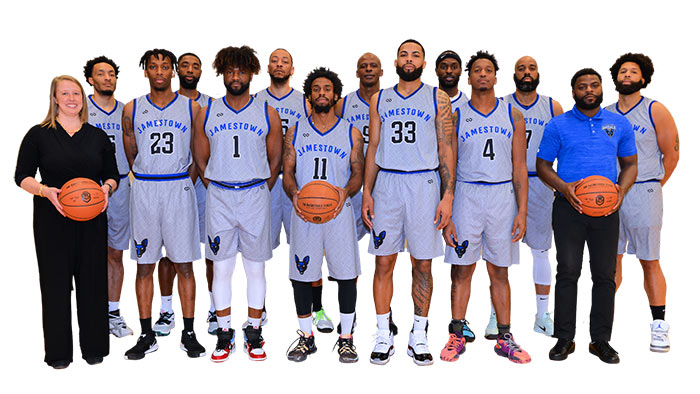 The Jamestown Jackals, Jamestown’s professional basketball team, opened its 2022 season against the Cincinnati Warriors with back to back games Friday and Saturday, March 4th and 5th at Cassadaga Valley High School.

Following tryouts December 22 at the JCC gymnasium the Jackals solidified its roster immediately before an exhibition game February 24 against the KW Titans of the National Basketball League of Canada (NBLC), a nail biter of a game the Jackals lost 113-111. The roster consists of twelve players recruited mostly in the upper Midwest and New England but also including 6’8” Daniel Mulamba from the Democratic Republic of Congo. Typically, in minor league play, there is considerable turnover in team composition from year to year.

This year’s team features seven new recruits and six returning players from the 2021 season, including player-coach Raheem Singleton currently sidelined with an injury.
The team competes in The Basketball League (TBL), a national professional organization comprised of six regional districts. There are forty-four teams in the league, up from twenty-nine the previous season. Last year the Jackals competed in the Northeast division.

Due to travel complications associated with the league expansion the team moved for the 2022 season to the Upper Midwest division. Upper Midwest includes six other teams all from Ohio and Michigan. This will be the seventh season of professional basketball in Jamestown. The schedule runs from March through June when the national championship is held. The Jackals placed fifth nationally in the 2021 season. 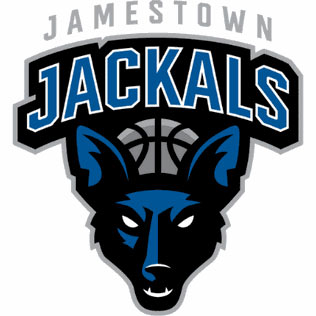 “We’re very excited,” said Kayla Crosby, executive director of the 501(c)3 nonprofit that owns the Jackals. “We have new uniforms. We’re looking forward this year to competing for the national championship.” Kayla, formerly an employee of JCC, established the Jackals and the nonprofit which operates the team in 2015. The nonprofit, entitled #IntegrityFirst, is committed to community service. Team members partner with the YMCA and serve as mentors to local youth in order to build connections and encourage positive lifestyle choices. The mentor year climaxed in November 2021 with a dinner and graduation ceremony at the Harbor House hotel. #IntegrityFirst’s motto is Stop surviving, start thriving.

#IntegrityFirst is seeking sponsorships from local organizations. It believes that collaborative opportunities exist to the benefit of participating agencies as well as the community as a whole. It is confident that, given community support, professional basketball in Jamestown will continue to grow and thrive.