The Jamestown Jackals announce upcoming playoff games for their sixth season, hosted on their home court!

Open to the public, the first Eastern Conference playoffs will be held Wednesday, June 30 at 7 PM at the Warren Area Highschool, featuring the Jackals vs either Carolina/Atlanta.
A second game will occur Friday, July 2 also at 7 pm, followed by a Saturday tie-breaker if needed at 5 pm.

The Jackals are excited to host the playoff games on their home turf; a different one than usual due to effects of the Covid pandemic. Unable to play at Jamestown Community College due to state restrictions, the team had to find a new court to call their own.

“We started the season at the Warren YMCA and then hosted the rest of our games at the Hagerty Family Events Center in Erie, PA, and the Erie Boys and Girls Club….NY has been restrictive, so we are happy that PA has offered us the ability to have a season” says teamowner Kayla Crosby.

The area team was established in 2015, following Crosby’s founding the non-profit organization #IntegrityFirst, Inc. Her goal was to bring a home basketball team to Jamestown, creating an educational charity that owns a team, and with it providing positive role models to the community. 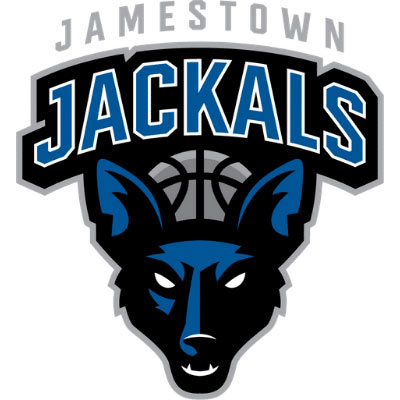 Six years later, the Jackals are now in their third season with The Basketball League, a pro outfit. Off the court team members have engaged in a variety of community service projects, such as working with Healing Word Ministries to distribute food during the pandemic; hosting a fundraiser game with the Jamestown Police Department and County Sheriffs; and most recently conducting story time at the local library. Head coach Brandon Lesovsky, who began in March, is credited by Crosby as essential to bringing the team to where they are now, as is her family.

Crosby also expresses her gratitude to the community for giving back to the Jackals. “Recently we participated in Give Big CHQ, which was amazing. We raised $15,000 which was helpful towards paying our debt. We are always looking for fans to come out, buy merch, enjoy the games. We have activities during halftime. It is more than just basketball game.”

Now the Jackals are ready for the upcoming playoffs and hope to make it all the way. Their third season the team won the Northeast Conference, ultimately losing in Texas at the National Championships. They may have their shot again this season.

Fans and community members can pre-order tickets to Wednesday and Friday’s games at the www.jamestownjackals.com, $10 for general, $5 for students; or at the door for $15 general, $10 students. Games can also be live streamed via PayPer view. All ticket admissions support the team and their continued work within the community. More information can also be found on their Facebook page.