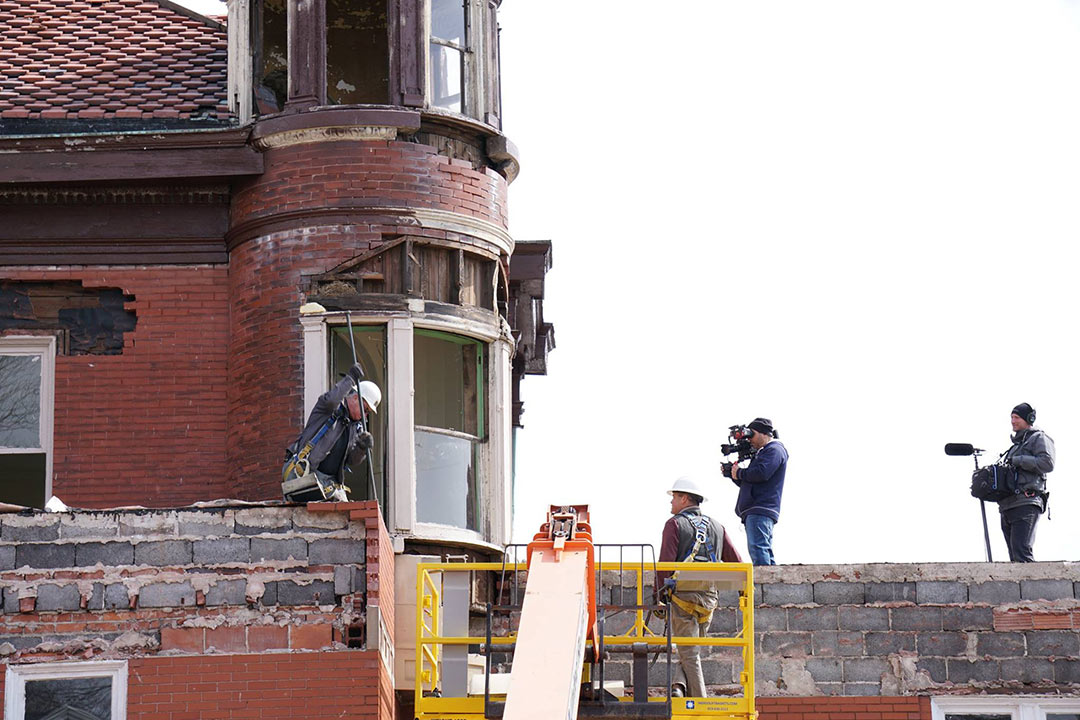 The Moose Lodge, which was formally known as the famous Galloway Mansion dating back to the 1890s, is set to be demolished soon. But before it happens, Black Dog Salvage, part of the show known as “Salvage Dawgs,” has been filming at the location since Tuesday, wrapping up on Thursday. The show is a reality show centered around Robert Kulp and Mike Whiteside from southern West Virginia salvaging valuable parts of old buildings so when they’re demolished, everything doesn’t just go into a landfill. They aim to save some history. Anything they don’t sell, they turn into furniture in their shop.

“Gina from the Chautauqua County Land Bank invited us here,” said Robert Kulp. “We were going to come in February, but we decided to come up now, and it is amazing.” The show will be entering its eleventh season in the fall, and Jamestown’s Moose Lodge will be featured in the first two episodes.

“There’s just so much amazing stuff we found that we had to split it into two episodes,” Robert stated. “One episode will be about the interior, while the other is about the exterior.”

Robert spoke of how welcomed he felt by the community of Jamestown, and how he’s looking forward to coming back some day. “We had so many people come up to greet us, and everyone here is so friendly,” he said with a laugh. He added, “We’re hoping to wrap up soon so we can go to the Comedy Center!”

Sitting on the back of the truck, away from all the noise, he talked about everything they found while salvaging the Moose Lounge. They found old and new things inside the lodge, while on the outside, they have some masonry and the signs. One of the signs was of the Cub Scout Troops, which they donated to the troops themselves.

“I’ve been doing this for about eight years, and I still don’t know anything about television!” Robert laughed. “I’m lucky to have such awesome people behind me who know what they’re doing. When we first started out, Mike and I thought we would be lucky to have just five episodes, and here we are, ten seasons later!”

And they’re still going strong. “Salvage Dawgs” is one of the top three rated shows on the network. The tenth season of “Salvage Dawgs” premiered April 3. Meanwhile, readers can check out new episodes every Wednesday night at 9 p.m. on the DIY network.