Juneteenth! Jubilation Day! The anniversary of the official end of slavery in Texas. Jamestown will celebrate the event Saturday and Sunday, June 19 and 20 at Jackson-Taylor (formerly Chadakoin) Park. The family-friendly program will include music, food, fun and games. The place to be this weekend.

A Juneteenth festival is hardly new to Jamestown. Although the covid pandemic forced cancellation last year, Juneteenth has been celebrated annually in the community for more than twenty years. More than the commemoration of a significant historical event, Juneteenth has become here in Jamestown, as well as throughout the country and, indeed, around the world, a celebration of ourselves as a community and of our common humanity. Celebrations, each with a local flavor, will be happening all over the country this weekend.

What, then, is Juneteenth? Why Texas? It was on June 19 in 1865 that union general Gordon Granger announced by proclamation to the unreconstructed state the official end of slavery in Texas. Gordon had been assigned supervision over the district of Texas after the Civil War. From his headquarters in Galveston he read out General Order number three, one of several regulations designed to maintain order in the district. It is likely that most of those held in bondage, particularly in the extreme south of Texas, were hardly aware of the Emancipation Proclamation. Hostilities hadn’t completely ended with Lee’s surrender at Appomatix. Fighting continued west of the Mississippi until June 2, but Texas had experienced relatively little of active warfare.

General Order Number Three: The people of Texas are informed that, in accordance with a proclamation from the Executive of the United States, all slaves are free. This includes an absolute equality of personal rights and rights of property between former masters and slaves, and the connection heretofore existing between them becomes that between employer and hired labor…

Granger then dispatched soldiers to read out the order in Galveston, first at Union Army headquarters, later at the Negro Church on Broadway. One can only imagine the excitement, the jubilation experienced by the ex-slaves knowing they were then free. Over time the celebration has become increasingly popular. Early on it was observed mostly by ex-slaves and their descendants in venues where Black Americans were permitted to congregate. African Americans were banned from public parks in many locations after the Civil War. Today, a number of states have designated Juneteenth an official holiday. Federal recognition may eventually follow.

The opening ceremony for the festival is scheduled for 11:00 A.M. on Saturday. The ceremony will take place at the culmination of the newly installed nature trail in the park in the vicinity of Tenth Street. Mayor Sundquist will issue a proclamation recognizing June 19 as a special day of remembrance in Jamestown. Local historian Alize Scott will deliver remarks on the history and significance of Juneteenth. Following, under the direction of city arborist Dan Stone, two decorative trees—a golden weeping willow and a queen silver maple—will be planted and dedicated. 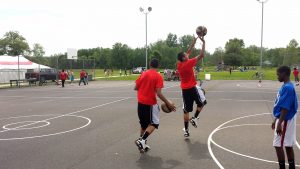 Sunday morning opens at 8:30 A.M. with a continental breakfast. Followed by a worship service at 9:00. The main event on Sunday will be a Gospel Fest beginning at 3:00 P.M. featuring local artists and live music.

On behalf of the Juneteenth planning committee Councilwoman Regina Brackman, festival organizer, would like to thank all who have supported this year’s festival with time, materials and donations. Thanks to CRCF for its grant understanding the value of the Juneteenth festival to the quality of life in Jamestown. Covid delayed planning for the festival until early May. That the committee was able to put a program together in such limited time is a testament to Ms. Brackman’s commitment. Ms. Brackman took over responsibility for the festival, as well as her place on the city council, from councilwoman Vickye James. Ms. James had dedicated her life to the welfare of Jamestown. The city will mourn her passing for a long time. A bronze plaque embedded in stone is being prepared to honor her memory. It will be placed in Jackson-Taylor Park close to the newly planted trees.