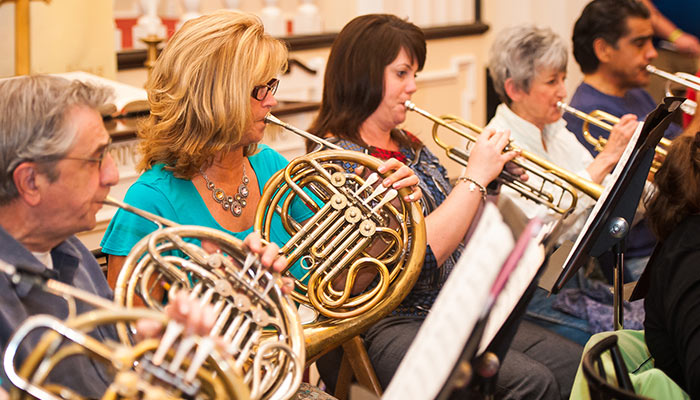 “Never ever underestimate the power of music,” said Andrew “Andy” Coccagnia, orchestral conductor and director for Jamestown Area Community Orchestra (JACO). “For everybody, there is some piece of music, something that you’re drawn to that reminds you of something that happened in your life when you hear it. Music is what takes me away.”

JACO will perform at 4:00 p.m. on Sunday, October 22 at First Covenant Church, located on 520 Spring Street in Jamestown. This marks the fall concert of JACO’s 24th year. This concert is free and open to the public. A free-will offering will give appreciative community members an opportunity to support the orchestra.

A Passion for Music
“A lot of the knowledge that I share I learned from my father, who was my music teacher. He was my band director in high school,” Coccagnia said. Coccagnia has directed the JACO for 14 years, and has been a music teacher at Washington Middle School for 35 years. He is also a clarinetist and has played in both concert bands and larger bands over the years. During concerts, Coccagnia educates the audience by giving historical background and anecdotes before each piece.

“You don’t want your audience to just be sitting there while you say ‘OK, now we’re going to play a piece by Beethoven’ and then you turn around and play, and that’s it,” Coccagnia said. “I think it’s important for our audience to know why he wrote it, how was he feeling when he wrote it, and what was going on in his life. A lot of audience members have said how comfortable they feel because they can relate to what the orchestra is playing.”

“I always have some sort of musical jewelry on because it’s part of me, it’s how I identify myself,” said Cathy Regis-Green, JACO’s concertmistress and a violinist with the orchestra since 1993. “Our payment is the enjoyment of playing together…it shows that it’s definitely a labor of love for all of us. It really is a passion,” she added.

“In this group and in Chautauqua County in general, there aren’t big egos here,” Regis-Green said. “I’ve found extremely talented people who are really humble. JACO provides an outlet for the performers to share their avocation with an appreciative audience.”

“I feel strongly about the importance of music education and that a strong foundation of music education in schools should foster lifelong music appreciation and involvement,” Regis-Green said. She was a local public music schoolteacher for 29 years.

Sharing the Connection
“A lot of our success is due to Andy’s direction,” said Craig Ridgway, JACO’s publicity coordinator. “He spends hundreds of hours looking over the numbers, deciding what to do, looking into the their background, finding the appropriate way to play, and masterful programming–there’s always something for everybody.” Ridgeway is also a timpanist, playing the big kettledrums. Ridgeway has been involved with JACO for at least 14 years and has directed theater for high school musicals and plays for 20 years.

According to Ridgeway, JACO Conductor Andy Coccagnia’s connection “…makes it very comfortable, enjoyable and fun for both the performers and the audience.”

Going Solo
The current JACO began as the orchestra whose only “job” was to accompany the First Covenant Church’s Living Christmas Tree cantata choir and pageant. Players found the experience so rewarding they decided to continue performing beyond Christmastime.

Russell Johnson, retired chair of the Music Department in the Jamestown Public Schools, and conductor for the Living Christmas Tree during its first 12 years, was the chief organizer. His enthusiasm helped create the inaugural concert of the new JACO on April 25, 1993 at the First Covenant Church, with Normal Lydell conducting on the podium.

In 2017, JACO became incorporated as a non-profit, all volunteer orchestra organization which confers a benefit for donors and supporters. Musicians, both amateur and professional, community members from college age through retirement, fill every seat in the orchestra. They perform twice a year, giving a spring concert in May and a fall concert in October.

JACO’s mission is to build community by giving local musicians the opportunity to join together in producing beautiful, classical and popular music for the community at no cost and very much for their own enjoyment which is very clearly demonstrated at every rehearsal and concert.

A Mix of Music
Each concert includes a wide variety of music including a pop number, a classical number and Romanticism. Concerts are put together in only four rehearsals. “It’s interesting for the performers because we don’t see the music until the first rehearsal,” Ridgway said. “We open our folders, there’s the music, it takes the full two hours. We have three more rehearsals and that’s it.” The dress rehearsal held two hours before the concert.

“When I program concerts it’s a challenge for me,” Coccagnia said. “I love the challenge because I’m trying to find music that I know will pull our audience in and that they can relate to.” This concert includes the classical piece “Rosamunde Overture” by Franz Schubert, which Coccagnia argues is one of his greatest works. There will also be a medley of George Gershwin music, which is more of a quasi-jazz piece. Coccagnia always incorporates something slower, like a ballad, like the arrangement they will perform of “Autumn Leaves” by Johnny Mercer.

“I love the orchestra, it’s the highlight of the season for me,” Ridgway said.

“It’s just great for Jamestown,” Coccagnia said. “Community orchestras are all over the U.S. and it’s exactly what it says–it’s a community. We have players in our group that just love music and wanted to give it a try and that’s awesome to be able to have that for this community.”