The Robert H. Jackson Center, a non-profit dedicated to promoting liberty under law through the examination of the life and work of Supreme Court Justice Robert H. Jackson and its relevance to current events and issues, is pleased to announce a two-day event to commemorate the 75th anniversary of the United States Supreme Court decision in West Virginia State Board of Education v. Barnette, 319 U.S. 624 (1943) Tuesday and Wednesday, October 16-17, 2018.  Justice Jackson wrote the Court’s majority decision which clarified First Amendment Free Speech protection for those with religious convictions conflicting with the routine public school practice of reciting the Pledge of Allegiance. The event will be held at the Robert H. Jackson Center, 305 East 4th Street in Jamestown, NY. Robert H. Jackson Center Executive Director Deke Kathman made the announcement.

Among others, the Jackson Center has scheduled Professor Robert L. Tsai of American University’s Washington College of Law, Philip Brumley, General Counsel for the Jehovah’s Witnesses, and Marie Barnett Snodgrass, one of the named petitioners in the Barnette case, to contribute to this compelling presentation.   The program will begin on Tuesday, October 16, with an open house at the Jackson Center from 4:00 to 6:45pm, which includes a docent-led historical exhibition of various visual and interactive presentations of the Jehovah’s Witnesses’ struggle for religious freedom leading up to the Barnette decision. A formal program will begin in the Center’s Cappa Theatre at 6:45 p.m. It will include a 15-minute stage play, The Faithful Do Not Yield, which was originally presented for National History Day at the 2017 National Contest.  After the performance, Professor Tsai will deliver his lecture, “What Might Have Been.”

On Wednesday, October 17, the stage play, The Faithful Do Not Yield, will be performed again in the Cappa Theatre at 9:30 a.m.  Two illustrated presentations will follow the performance, tracing the events surrounding the two major U.S. Supreme Court cases, Minersville School District v. Gobitis and Barnette.  The Center is honored to invite Thomas A. Loftus, III, the grandson of Justice Jackson and former Jackson Center board member, to read passages from the Barnette decision. A roundtable conversation with Marie Barnett Snodgrass and Louise Gobitis Blanton will follow. At 11:15 a.m. the Center will welcome keynote speaker, Philip Brumley to deliver his lecture, “Jehovah’s Witnesses: Canaries in the Coal Mine of Human Rights.”  Please call the Jackson Center at (716)483-6646 or check its website, www.roberthjackson.org, for more details.

The program was made possible by donors and the sponsorship support of the Watchtower Society and UBS-Wight, Auer, and Kane Group.

The Robert H. Jackson Center is a 501(c)(3) nonprofit organization that envisions a global society where the universal principles of equality, fairness and justice prevail. The Center invites and engages students of all ages, scholars, educators, national officials and international dignitaries to analyze contemporary issues of peace and justice through the lens of Justice Jackson’s body of work. 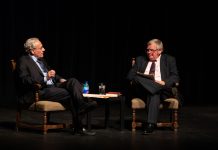 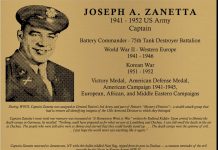