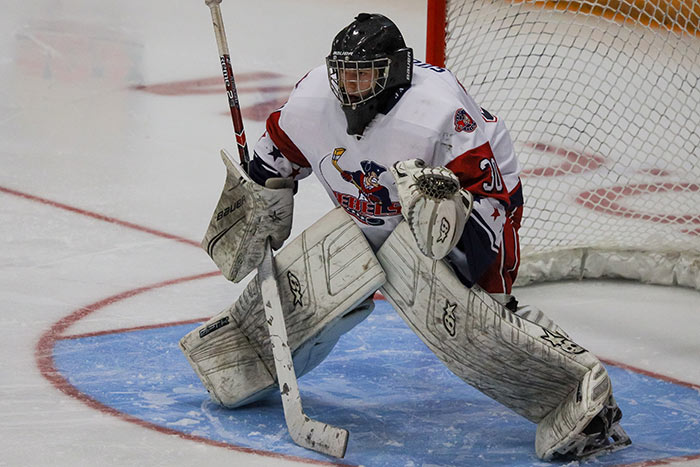 The Jamestown Rebels are back at the Northwest Arena after a year hiatus due to covid. They’re giving local fans a fun, fast-paced, and affordable return to normalcy. “And we’re thrilled with all the local fans who come out to the arena and make every game even more exciting for everyone,” Manager Jason Rent told the Gazette.

The Next Puck Drops

The Rebels will be back at Northwest Arena this Friday and Saturday, January 28 and 29, for a back-to-back face-off against the Maine Nordiques, with a winning tally so far of four wins and two losses against the Nordiques this season. The puck drops both nights at 7:05 p.m.

With just under half the season behind them, the Rebels have battled their way into a playoff position and will look to improve their standing from fourth place in the NAHL’s east division over the next three and a half months.

The Jamestown Rebels play in the North American Hockey League, NAHL, which has placed more players in top college and university teams than has the first-tier USHL—United States Hockey League. It’s top-tier hockey by some of the nation’s best young stars.

The twenty-nine team NAHL stretches across the country from New York to Alaska with Jamestown being the only team from the state of New York. “Most of the games are played on Friday and Saturday nights which makes a Rebels game a great night out for families,” Jason added.

“These guys are ambassadors for the city of Jamestown wherever they go across the country,” Rent said. “They love it here, and they are especially proud to say that the Northwest Arena and the hockey facilities here top just about other every place they go. Jamestown’s arena is truly an NHL-class facility.”

“When it’s possible some of our team members will visit local schools, have lunch with students, and try to mentor them and help them, not just in hockey but in any other way they can,” Rent explained. “They want to fit into the community through service.”

The Rebels understandably had a slow start to the season, according to Rent, after going dark last year due to covid.

Rebels’ Head Coach Joe Coombs explained, “Due to the fact we were forced to sit out last season and the rest of the league played, our players from the 2019 season were dispersed throughout the NAHL draft. We lost our veteran players and started with a very young team.” But the Rebels kept their head above water during the first half of the season, and after making some key trades and developing some of the younger players, the team has shown a great deal of improvement compared to some of the older teams in the league.” The second half of the schedule also should help as the Rebels will enjoy a lot more home games than in the first half.

Games so far this season have enjoyed surprisingly good attendance and Rent is very optimistic about the second half. “Traditionally our numbers are way better during the winter months with football season wrapped up. What we are seeing now too is people who have been laying low for the last two years due to the pandemic are starting to venture out more and get back to having fun.”

Jason Rent is a Canadian native from Hamilton, Ontario, and played hockey at Guelph University. “But there have been a lot of changes in hockey since I played in college,” he said. “The game keeps getting faster.”

“When I was 13 my dad told me ‘One day, the Americans will take over hockey.’ American kids have a lot more skills. That is because of a difference in training philosophy, in some ways training more for strategy than for perfection in drills.” Jason has lived in Jamestown since the beginning of this season but he has lived in the US for 25 years.

“As far as the hockey goes, the skill level of the players in the NAHL gets better every year,” Jason added. “Our goal is to give these players the opportunity to move upward from here to the NCAA level and in some cases beyond that to professional hockey. The bonus is that people in Jamestown can come out, watch the future stars of our sport, and have fun for a fraction of the price of going to an NHL game.”

Rent credits Coach Joe Coombs, too, for excellence in training. “He has probably sent more kids to the National Hockey League than any other coach in the NAHL. His philosophy is to teach the players, not just to manage them on the ice.”

Rebels’ Manager Jason Rent’s message to the city of Jamestown is “Come on out and give it a try if you haven’t been here before. It’s great hockey and it’s a lot more than that—it’s an event! It’s entertainment for the whole family. We have a great bunch of hard-core fans. Come on down to the Northwest Arena and join them—Get Rebellious!”

Home From the Holidays? Not for the Local Homeless