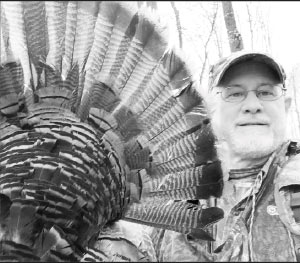 It has happened to me more than once. I’ve had to leave a turkey that was actively responding to my calling. The next morning he was right there waiting for a pretty little hen — which turned out to be me.

Here’s an example. Back when I had to be to work by 7:30, I was calling a gobbler that was coming in slowly. Work was waiting, so I left. He must have come in, looked around for the hen he thought he heard, and failed to find her. So he decided to roost right there, apparently hoping she’d show up the next morning. I was there before daybreak and he was roosted in the tree I had been calling from. I flushed him.

Similar scenarios have happened to me several times over the years, and I have found that it pays to go where I’ve left a gobbler the day before.

Fast forward to last week. By late morning I was soaked from the steady rain, and I finally heard a gobble in a field near me. This bird gave three shout-outs as he made progress through the field toward me. When he came into view I realized that if he kept on cooperating he’d arrive 30 yards from my spot. I began planning on where I’d shoot him. That’s when I noticed three deer walking directly toward him doing double-time steps as they pursued that gobbler.

It defies explanation, but they seemed to have different plans for him. The deer caught up to the gobbler and put their noses to the ground as though they were herd dogs pushing a stray cow. At times they were no more than three feet from him, and none of the three were ever more than nine or ten feet behind him. He answered my call even when they were close, but they crowded him and wouldn’t let him turn toward me.

The legendary Mr. Murphy made a law about these things — if something can go wrong, it will.

That bird never got closer than 60 yards. Finally, he entered the woods and a big brush pile blocked my view. I could see the deer milling around at about 90 to 100 yards from me, but I couldn’t see the gobbler. I knew he was still near them because he gobbled back at my call.

After about 10 minutes the deer left, presumably following this gobbler. He never answered again, though I tried to get a response for about an hour.

The next morning I was at the same spot at about 5:30. At 5:39 I checked the time and a gobbler flew out of a tree 60 yards away, near the spot where I last saw him the day before. Yes, Mr. Murphy was back again with his stupid law.

But the hunt wasn’t over. The turkey gobbled occasionally, made a big circle, and after a while I realized he was heading for the field. This time I saw him enter it. He was answering my calls as he strutted toward the spot where I wanted to shoot him. I kept wondering if those nuisance deer would show up. They didn’t. This time, he arrived at the spot where I wanted him. I pulled the trigger.

The lesson is this. All is not lost when something bad happens in the turkey woods. Turkeys are unpredictable, but once in a while you can figure them out. I’ve seen this happen over and over. Gobblers I had to give up on were there the next day, ready to play the game. Have faith. He’ll be there in the morning.