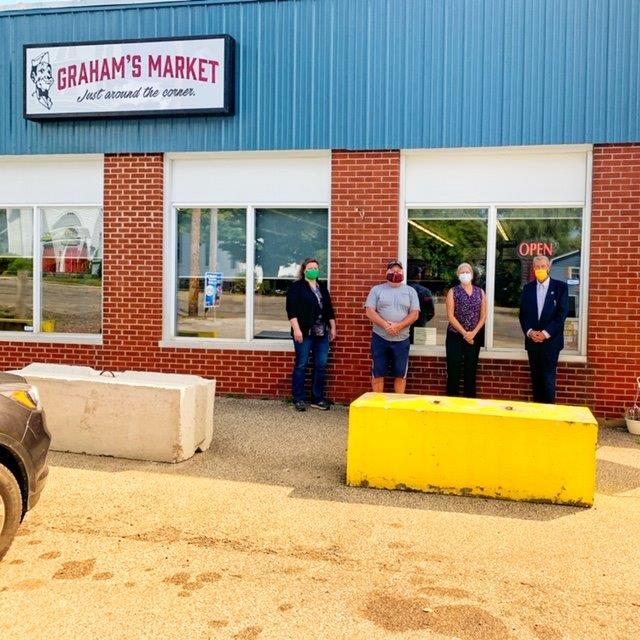 Graham’s Market, located at 104 Church Street, Sherman, NY, is a grocery store that was originally established in 1969 as a Quality Market, was later taken over by Jeff and Jody Mack in 2004, and closed in 2018 for personal reasons. The closure of the store created a “food desert” due to the fact that the closest grocery stores offering fresh produce were approximately ten miles from Sherman. The population of Sherman consists of a large contingent of senior citizens and young families, both of which have limited access to transportation and therefore have limited access to nutritional food choices with the absence of a local grocery store. Responding to this need, Mark Graham left his successful construction business of 30 years and pursued acquiring the closed grocery store, which took almost three years. Mr. Graham is continuing the family tradition bringing the recipes and history from his father and grandfather who had the original “Graham’s Market” and “Bill’s IGA” on Sherman’s Main Street.

The County of Chautauqua Industrial Development Agency (CCIDA), in collaboration with Five Star Bank and Southern Tier West, provided a financing package for the purchase and re-opening of this sole grocery store located in the Village of Sherman in late 2019, at which time Mr. Graham moved ahead with the project to purchase and renovate the facility as a local grocery store. Chautauqua County Executive, PJ Wendel said, “By re-opening this grocery store, the Sherman community can enjoy fresh produce once again. I applaud all of the agencies involved in making this happen.”

“This is great news for the Sherman Community,” said Mark Geise, Deputy County Executive for Economic Development/Chief Executive Officer of the County of Chautauqua Industrial Development Agency. “I’m glad the CCIDA could provide its assistance in bringing this project to fruition, and I’m grateful to Five Star Bank and Southern Tier West for partnering with us.”

According to Colleen Meeder, Village of Sherman Mayor, “many residents requested that the Village take
action to see that the grocery store is reopened. We committed extensive hours to supporting Mark Graham
in this endeavor, and though we are facing many challenges due to COVID at the moment, we are optimist that Graham’s Market will increase traffic in downtown Sherman. With the opening of Graham’s Market residents are overjoyed that they can now purchase healthy foods locally,” continued Mayor Meeder. The Sherman Chamber of Commerce President, Debra Sanders, also provided a letter in support of the project.

Any comments or questions regarding this announcement should be addressed to Deputy County Executive for Economic Development/CCIDA Chief Executive Officer, Mark Geise, at geisem@co.chautauqua.ny.us.

Two Local Companies Connect in Response to the COVID-19 Crisisjames

Jamestown Container Steps Up Production and Service During COVID-19 Crisis

Steve Sorensen -
0
For many deer hunters, butchering a deer at home is a natural conclusion to the hunt. Growing up, our family butchered our own deer....

How to Prepare for a Unique Election Day