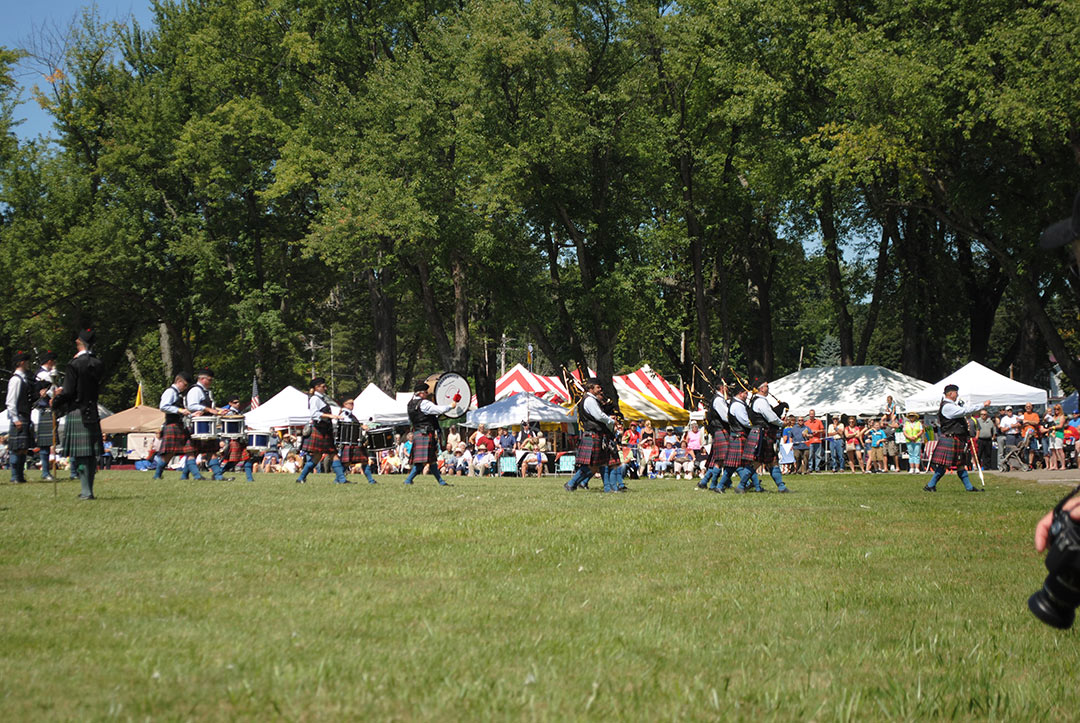 Bringing the common traditions of the seven nations of Celts together for one big celebration is the goal of the 14th annual Jamestown Regional Celtic Festival. Held on the grounds of Mayville NY’s beautiful Lakeside Park, the popular festival features bagpipe bands, concerts, street parades, and dancing. Both participants and people attending are coming from places like Canada, Ohio, Buffalo, and Olean to join in. Last years attendance was over 4,000 people.

“There’s a lot of Scottish and Irish heritage in the county” says Doug Clark, the festival’s director for the past 14 years. “There’s plenty of shade at the park for people to watch and enjoy the festival. Of course, there will be Guinness and Smethwick” he adds, noting that the beers mentioned are a recognized part of the Celtic heritage.

Celtic culture began to develop as early as 1200 B.C. on the western edges of Europe. Music, food, religion, and language traditions from these specific regions have survived and offer a rich heritage for modern day people to enjoy. Celtic regions, of which there are eight recognized, include Asturias, located in northern Spain; Brittany, on the northwest coast of France but distinct from other French regions; Cornwall, the most westerly region in England; Galicia, on the northwest coast of Spain; the more well-known Ireland; the Isle of Mann which is part of the British Isles; Scotland which is comprised of over 750 Isles; and Wales.

For the third year the popular Celtic-Rock band from Vancouver, Canada will open on Friday night August 23rd at 7pm in the Beer and Wine garden for $5 a person.

The Town Pants bring their own brand of high energy “West-Coast Celtic Rock” and play festivals from Europe to Canada. They’ve played in twelve countries and hundreds of cities.

Saturday opens at 9am with tickets for $10 a person, $8 for Seniors, and children 13 and under free. The full day will feature more Celtic music, both fiddle music and eight bands with the iconic bagpipes. Bagpipe bands begin at 9:30 and play through the morning and afternoon. Authentically dressed Highland dancers from Scotland and the 96 Highlanders Pipes and Drums are featured.

The 96 Highlanders Pipes and Drums is a local group, started in 2001. They host the festival each year and festival Director Doug Clark is a member. As a group dedicated to the community, they play yearly around the Western New York area and raise money for families of fallen police officers, fireman, and those in the military.

Ancient athletic games are another great draw of the Celtic Festival. Originally used as military training, Heavy tests of strength and endurance date back at least a thousand years, with participants heaving river rocks and tree trunks. Eventually the feats of strength were done at festivals and celebrations. Many are familiar with Highland Games, which are now held annually around the world at ticketed events, especially in Scotland. They’ve become a way to pass the culture from generation to generation.

At the Celtic Festival in Mayville, The Buffalo Athletes Kilted Throwers Club is presenting 50 Heavy Athletes competing in six events, like the hammer throw and the caber toss. A caber is like a twelve-foot telephone pole and is thrown end over end. Athletes compete on Junior, Amateur, Masters, Senior Masters, and Professional levels.

Doug Clark helped to start The Celtic Festival in 2005 because he believed it was something Chautauqua County residents would appreciate. The festival provides genealogical resources to give attendees the chance to research surnames and investigate their fascinating ancestry.

A Clan was a traditional kinship grouping made up of families and extended families; within the clan was some form of hierarchy, but all people in a clan considered themselves responsible for one another. The Clans that register for this event, of which there will be close to thirty, provide knowledge of history and represent a surname.

Visit www.96thhighlanders.com under “Festival” for a complete schedule of events, the clans represented, food vendors, and volunteer information.