The prophet Samuel could not believe it when the Israelites asked for a king. He was disappointed and displeased. He was saddened and frustrated. How could they want a king?! He wondered. They have God as their king! What could they possibly expect a man to do that God could not?

When Samuel approached the Lord with the people’s request, the Lord was disappointed too. They have rejected me from being their king, God lamented. Here they go again… forsaking me and putting their trust in all the wrong places. The Lord instructed Samuel to listen to the people, but first to warn them and show them the ways of the king that would reign over them.

And so Samuel told the people,

“These will be the ways of your king:

And on that day,” Samuel concluded, “you will cry out because of the king you have chosen yourselves; but the Lord will not answer you.”

But the people refused to listen and replied, “We don’t care; we are determined to have a king.”

(paraphrase of I Samuel 8)

The Bible was written long ago. It was written to an ancient people in ancient times with ancient problems. Yet, it is still marvelously relevant. There are lessons to be learned from I Samuel 8 – lessons that are particularly important as the United States is recounting the Americans votes.

As we approach this combative, tumultuous, and impassioned election, I can’t help but wonder if God isn’t once again shaking his head, rubbing his temples, lamenting: here they go again… forsaking me and putting their trust in all the wrong places.

No matter what happens remember this:

Christ is our King.

And his ways are not the ways of this world. 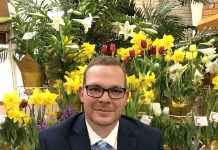