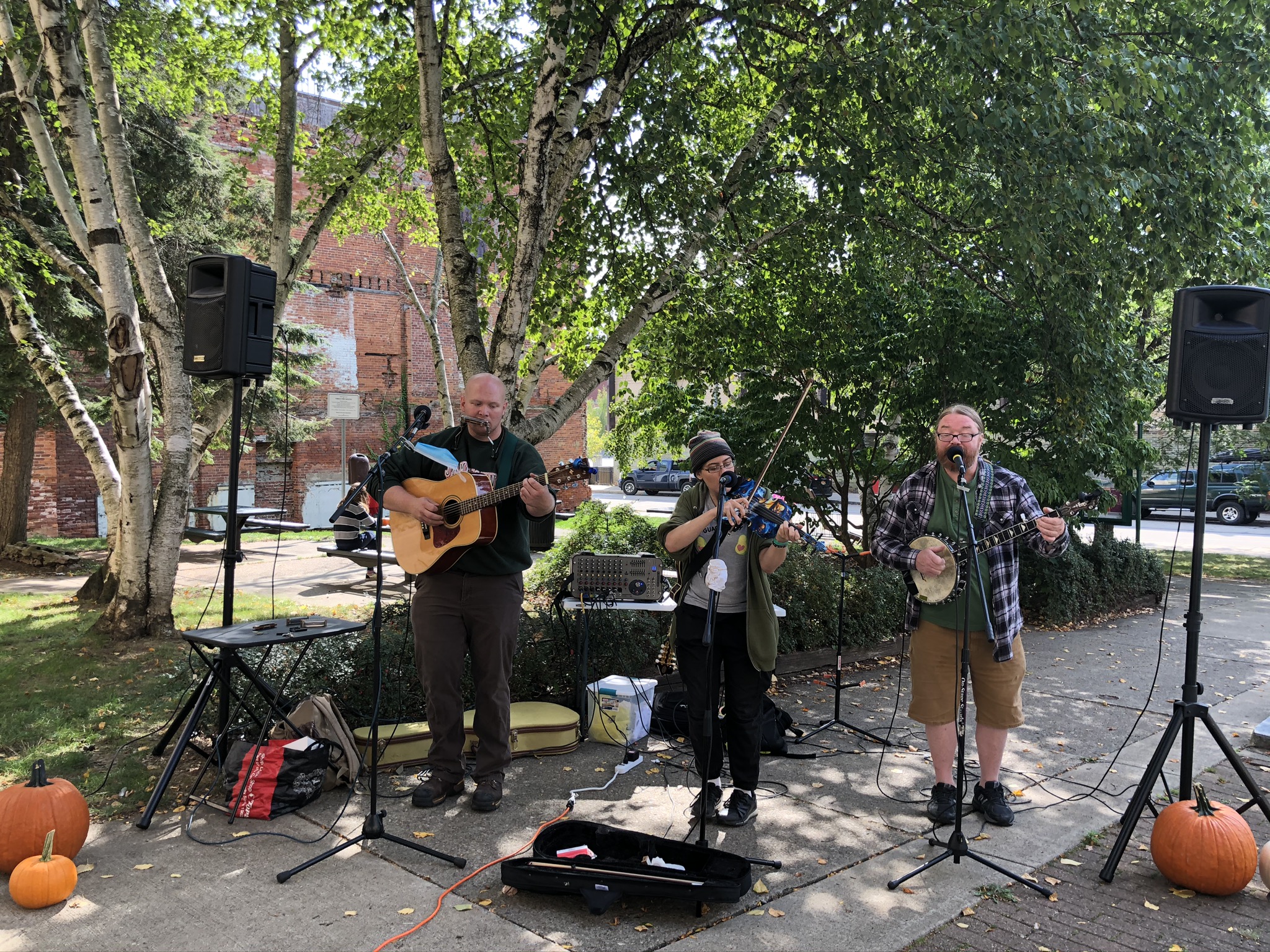 Rooted in the local music scene in western NY is a three-piece string band that hearkens back to American roots by bringing old-time music to the forefront of local venues.

Deep Fried and Dipped in Honey, consisting of Jason Green, Sara Rafaloski and Billy Blakey are fully invested in the appreciation of the old-time music genre and are enthusiastic about adding to the lineage of timeless pieces of music from that era.

“Old-time music is like bluegrass, just a little older and not as fancy. We play that type of music and we take contemporary songs and try to play them in that style. It really becomes something kind of cool,”
Green said.
If your ears perk up when you hear the sound of a fiddle, then you know you are in tune with a musical tradition that spans numerous generations in America, and as Green stated, “It resonates right down to your soul.”

Instrumentation and the songwriting process really delve deep into the era in which these tunes were created.
“You can see a bit of humanity through the music because it’s about folks. It’s folk music. Whether it’s about famine or other struggles, you can have some fun knowing that the song has been passed down,” Blakey commented.

When speaking of the importance of this style of music with the group, the passion and excitement in sharing this style of old-time music is palpable.

“It’s storytelling. You can take any one of our songs, whether it was written in 1776 or later, and we can add a current verse to it,” said Rafaloski.

“It’s a cool thing; it comes from the soul of America. These are tunes that even if you don’t know it, you know you’ve heard it before. You are hearing this music and it sounds so familiar; that’s the Americana old-time sound. It’s just so great,” added Green.

As an opinionated society, many people hunker down with their favorite genres and fear broadening their horizons. With Deep Fried and Dipped in Honey, their observation is that their style of music appeals to a very broad audience.

“It’s a real unique kind of music. We play this style and all people like it whether it’s little kids or older folks,” Green lamented.

“We really do appeal to little kids; they are our favorite. Whenever there are little kids at a performance, they just get it. They say, ‘you’re our favorite band;’ the music makes them dance,” he added.

If you have ever catch a glimpse of the trio performing live you may notice that they occasionally jump up to a four-piece band with the addition of their honorary drummer.

“Our honorary drummer is Colton Macri. He plays hand drums with us whenever he’s at an event that we are playing. He’s 10 years old; we should just put him down as a member,” Rafaloski said.

With the many challenges facing the music community during the pandemic due to lack of venues and cancellations of festivals, many local musicians have been feeling the toll.

Blakey said, “A lot of our band friends are out of work completely. Most people side-gig this music thing around here, but many don’t have anything right now. We’ve been fortunate to have something here and there.”

Outside of the band, Rafaloski enjoys sharing her musical talents in a mentorship manner. She is a familiar face at Infinity Visual and Performing Arts Studio in Jamestown where she teaches students in the art of old-time music.

“One of my first students I’ve now been teaching for 5 years on the banjo. She’s still there and loving it. She’s getting better than me already,” laughed Rafaloski.

In an area flourishing with incredibly talented musicians it is thrilling to have these artists share their love of a genre of music that resonates with many of us and be able to give back so graciously to the community with their musical talents.

Look for Deep Fried and Dipped in Honey to be gracing stages locally and sharing their incredible talents and passion for old-time Americana music across our local communities as soon as they can.

Deep Fried and Dipped in Honey can be found on Facebook and Instagram and can be reached by email at deepfriedanddippedinhoney@gmail.com.