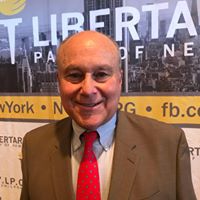 My name is Cruger Gallaudet. I’m running for Comptroller because no one should have so much power over the second largest pension fund of all 50 states. New York is one of only two states that gives complete control to the Comptroller.

That’s right, no board of directors or overseers to hold him to account. No one to make sure he is not taking bribes or using his influence to line his own pockets. Do we want to wait for law enforcement to sniff out corruption or do we want a system that prevents it in the first place?

Tom Dinapoli is against having a board of trustees overseeing him.

If I am elected I will make sure the pension fund is squeaky clean. I will make it my job to completely eliminate the possibility of corruption, abuse of power, personal gains, influence peddling, whatever one can dream up to take advantage of a $200 billion piggy bank.

Another reason you should vote for me is that it is time to break up the duopoly that is bringing down both New York and the entire nation. The Democrats and Republicans have been in power too long. Nowhere in the constitution does it say we should be a two party nation. The Libertarian Party has the best chance of becoming the third party.

The man at the top of our ticket, Larry Sharpe, has what it takes to become a force not only in New York but nationwide. So vote for me and vote for the entire Libertarian ticket. It’s time for your vote to count for a change.