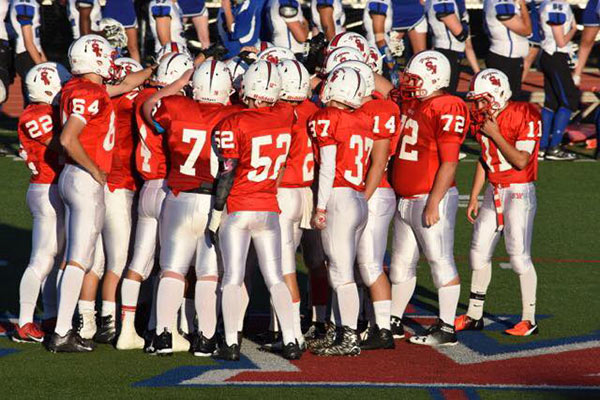 Friday (9/2) the Southwestern Trojans edged out the Gowanda-Pine Valley Panthers in a tough battle at home coming out on top 28-26. Head coach Jehuu Caulcrick describes the victory as a team win. It didn’t come easy, but they got the job done. “The biggest key to success to that game was just staying the course,” Caulcrick said, “we learned after last season that it’s a game of momentum. You’re not always going to be up; you’re not always going to be down. If you stay that course you’re going to be fine – and that’s what we did.

The Trojans rolled through the punches early, being down at halftime. In the second half they came out strong scoring 21 unanswered points beginning the fourth quarter up 28-12. The Panthers clawed back into the game scoring two touchdowns unanswered by Southwestern. In the end, the Trojans prevailed stopping Gowanda’s 2-point conversion attempt at the end of the 4th quarter.

Key for the Trojans was that the contest was an all-around team victory. A combination of running backs (Burns, Williams, Cole) stacked up more than 180 yards rushing. The key stop at the end of the game only solidified them as a more complete team. “The real positive was everything was distributed pretty well…it wasn’t just one person standing out, it was an entire team effort” Caulcrick said.

Southwestern is now looking to stay the course and endure a tough game on the road against Allegheny-Limestone. The Trojans struggled last season on the road going 1-4 and Caulcrick has definitely learned from that experience. “The big challenge this week is being out of our comfort zone…We have to keep our composure; we can’t be overwhelmed being away from our home field.”

One week at a time, the Trojans will continue to battle. They came out swinging, but only time will tell if winning is truly a part of this team’s identity, or just a thing of the past.