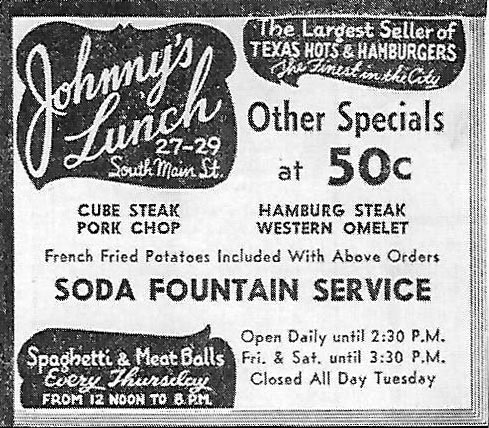 If the availability and cost of essentials these days have you down and out, maybe a walk down memory lane regarding the cost of living that some of us remember will be a real eye-opener. Take a look at some of the ads that ran in the Post-Journal in the mid 1940s and early 1950s for a meal out, whether lunch or supper. Johnny’s Lunch, home of the Texas hot, offered customers full meals with French Fries included every day of the week except Tuesdays. Check out 1945 prices!

The Parkside Lunch was owned by Joe Gullo. Once partner to Joe Conti, the co-owner of the early 1950s Parkside Cocktail Lounge, Mr. Gullo opened his business in the old Gifford Building at 38 S. Main Street. Look what 75 cents could get you in 1953!

But let’s roll back time a little more to the Great Depression that gripped the country in the 1930s. The City Public Market, once located on the corner of Forest Avenue and Market Street, opened its doors in 1913. The myriad stalls featured foods and wares of all kinds and was often one-stop shopping for many Jamestonians. In 1934, at the height of the Depression, the Market went through its second remodeling and reopened in April of that year. An ad that appeared in the April 27 issue of the Jamestown Post-Journal alerted customers to the following: pot roast at 12 cents a pound, lamb roast at 19 cents, steaks (any cut) at 12 cents a pound, and a veal chop special at 2 pounds for 25 cents. Eggs, Grade A large, were selling for 21 cents a dozen, the same price for a pound of coffee. And for a Saturday special, you could eat at Millie’s Restaurant—in the Market—and have a chicken dinner for 25 cents served with coffee and real cream!

In post-WW II America, certain foods that had been rationed in the war years became available once again but still in limited quantities. Real butter was among one of the most sought after “spreads” for bread or for use in cooking and baking. Dolores Thompson, former Jamestown historian, told the story in her article “Reminiscing” found in Remembering Brooklyn Square: The 1930S to The 1960s about her father’s resourcefulness during a shopping trip in the post-war era that included a little subterfuge! Butter had indeed become available again, but it was one stick to a customer. Her father went through the line (not sure what store, maybe the Quality Market in the Square) to buy that one stick “with his hat and coat on…went back minus the hat…went back wearing a different jacket. Honest as the day is long, Dad still wanted to provide the best he could for his family.” She never did say what the cost of that stick of butter was, but it must have been dear. But what a treat it was after making do with white margarine that was mixed with a capsule of “golden liquid” for the look, but alas, not the taste of the real thing!

Recession or Depression, we have to roll with the times and hope for the best.