It is the 40th Anniversary of the Chautauqua Sports Hall of Fame’s Banquet. Since 1981 nothing has canceled the annual event. In a normal year 450 sports fans and family members celebrate the roster of County athletes’ induction into the Hall of Fame. This year is different. It took a world-wide event to cancel the event. “We have never cancelled the banquet, regardless of weather, and to finally cancel it because of the pandemic is very disappointing,” said Randy Anderson, President of the Board of Directors of the CSHOF. He went on to say, “we were planning on doing some special things this year with it being our 40 th anniversary.”

Anderson said, “usually we do three main things at the banquet. We induct the honorees. We honor the outstanding high school, collegiate, and community athletes – the up and coming potential future inductees. And we give our Legacy awards to the community’s unsung heroes, student-athletes and volunteers.”
Learn more about
the Inductees

The 2021 Inductees are listed with their pictures in this article. Their expanded stories are available on the Hall of Fame’s website, www.chautauquasportshalloffame.org. Each Inductee has their own webpage with pictures from their life, their history, artifacts connected to their accomplishments and other information. This year there are eleven Inductees: George L. Barone, Jr., Sarah M. (Bogardus) Burnett, Andrew J. Creager, Christina M. Kebort, Michael A. Sirianni, Lewis G. Mack, Marc T. Tramuta, Randall G. Anderson, Harry G. Carlson, Larry E. Rodgers and Richard P. Shearman. This group brings the total number of Inductees to 220. 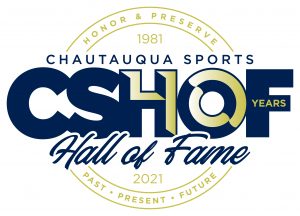 “We don’t want to downsize the banquet, but if we have to, we will. Maybe we will hold it in the summertime after most have received their vaccinations. If we held it outside, we would have room to spread out our usual 450 attendees,” said Anderson (Randy is an Inductee this year too!).

How it all Happens

One’s banquet ticket includes the commemorative Banquet Book which is full of information about the athletes and local advertisers. “Last year we had 300 advertisements in the book!” added Anderson. When asked how he managed that, given the organization is run on volunteer power, he said, “we have a 30 member board of directors. They are all experts in different sports related subjects, and we work together to select the annual Inductees, solicit the ads, and whatever else we need to do to keep the Hall of Fame running smoothly.” The Board members represent a good cross-section from all parts of the County. “When it comes to selecting the Inductees, we feel we get a good, honest, legitimate vote because of the Board’s depth and knowledge,” said Anderson.

Happy 40th Anniversary to the Chautauqua Sports Hall of Fame! The community looks forward to attending the 2021 banquet, regardless of when and where it happens.