The Chautauqua Lake and Watershed Management Alliance on Monday approved a $73,000 grant for the work. Funding is planned to come from an emergency action of the Chautauqua County Legislature along with special grants from two area foundations. The three had hoped some of the plant clean-up could be performed this month, but with CLA equipment winterized and  sub-freezing temperatures arriving this week, the CLA decided that the work would take too long and be too dangerous for CLA personnel to perform in late November and early December.

“The CLA and all lake residents are grateful for County Executive Borrello and the County Legislature for their quick consideration of collaborating on this grant,” said CLA President Paul O. Stage. “At this point, however, given the early onset of winter and its resultant physical conditions impacts we must delay in returning to the bay; the CLA will be ready to start work in Burtis Bay as soon as possible in the spring.”

A combination of strong winds, floating plant matter and very warm conditions in September and October led to the plants amassing throughout the bay, creating a localized panfish kill. Affected residents, county, CLA and Alliance officials hoped to be able to clear the plant masses this month. But the sharply colder temperatures and repeated snow storms made the work ill-advised in terms of operator and in-the-water worker safety in addition to risking millions of dollars’ worth of equipment that is not designed for cold-weather operation.

“If this grant had been available in September or October, we would have been able to get back out and clean-up the area,” Stage said. “But everyone appreciates how cold water on frozen metal creates safety concerns for our operating crews. And, with water temperatures descending, slippery metal walkways and frigid water are not something to which we want to subject our people.”

In a letter about the grant process to the Alliance’s executive director, Erin Brickley, Stage wrote that the CLA will be ready to attack the problem when the weather improves, and the association’s equipment comes out of winter storage. “We are delighted that funding is being brought to the table to address the special need and absolutely want to work collaboratively with the Alliance to implement a solution to this problem,” Stage wrote. “Our proposal to the county contained several items that need to be addressed about the project, given the very special circumstances that encompass it. Since the grant agreement we received does not address those items, and since they must be addressed, we need to have a further discussion with you about how to incorporate these items moving forward. We believe that there is time to do such given how we see the project proceeding.”

The letter made the following additional points:

“All of this bodes against proceeding with the project at this time. We could expend a significant sum in mobilizing, only to end up providing no service and then spend more dollars de-mobilizing. This would not be a wise utilization of resources. Such resources could be better utilized in the spring to perform actual site work,” Stage wrote.

“The project should be able to move forward in the spring, however. We expect that the situation will be less hazardous at that time and given the winter weather, likely won’t be as bothersome to the few near it now, until spring. Shifting from winter to spring also allows for improved project planning. Rescheduling to spring additionally presents an opportunity for a lower-cost project or for a similar cost demonstration project to occur.”

Stage said the CLA is also discussing the project with Air & Earth Design Services, of Albany, NY, which has a dredging proposal for implementation in areas that CLA equipment and manpower will not be able to adequately address. The plant material has accumulated so densely that its dredging method might be appropriate, Stage said, at a similar cost to budget. Delaying until spring will allow the CLA and Air & Earth to work through details and make the necessary arrangements for CLA support of the process.

Cost savings will be achieved by not having to incorporate the winter-time protections the CLA would need at this point. Planning for spring will also provide time to work through needed changes to the grant agreement terms and conditions. Saved dollars could then be placed in a contingency account for future special lake maintenance needs.

“Had the dollars been made available to us this past fall or late summer we would have removed the accumulation, with safer methods and in a less-costly way,” Stage concluded.

“To summarize, we have concluded that the risk to the workers and equipment is now too great to allow work to proceed for the foreseeable future. The risk of working in the lake is just too high to chance at this time. Waiting for a more weather-appropriate time will allow the several loose-end contractual details to be addressed and agreed upon. The work plan can be refined.”

The CLA, with a projected 2019 budget of $1.07 million, recently received the highest grade through the Alliance’s third-party evaluation process for a critical $162,050 for its annual lake maintenance program. 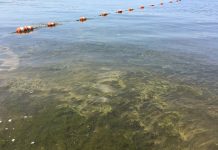 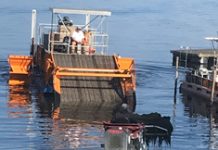