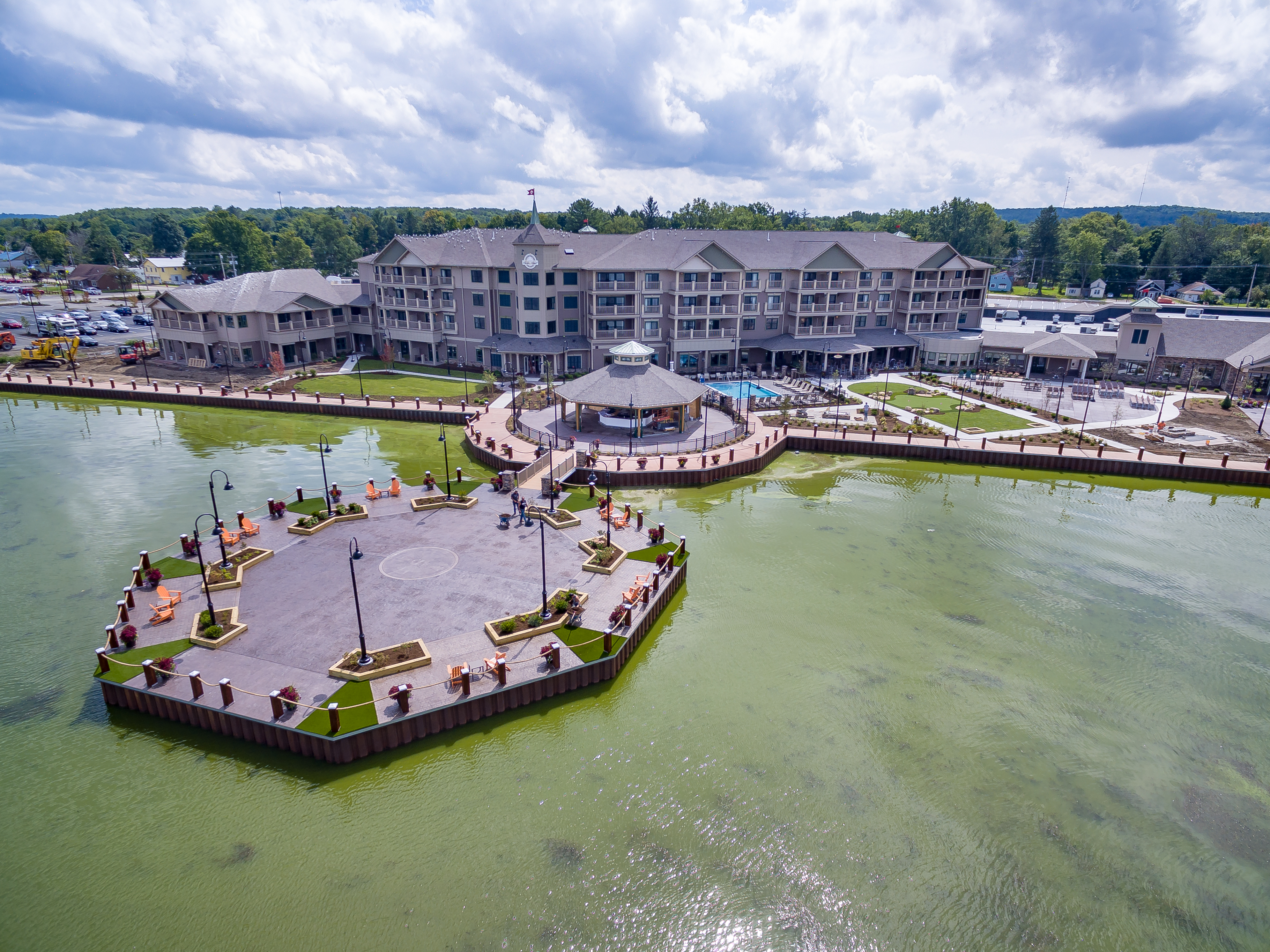 A great hotel is more than a place to sleep between visits to other places. It has to be a destination in itself, a place with adventures and attractions all its own.

The Chautauqua Harbor Hotel is slated for its Grand Opening and ribbon cutting this week, on Thursday, September 6.

The Chautauqua Harbor Hotel features attractions that make it a destination in itself, for local residents and leisure and business travelers alike. The nine-acre location includes 1,100 feet of spectacular Chautauqua Lake frontage. Fine dining and the Lakehouse Tap & Grill will be matched by banqueting facilities for large-scale events like conferences and weddings. The restaurant will be open all year around serving American cuisine, but Hart adds, “…our head chef has an even bigger skill set.”

The main feature, of course, is the Chautauqua Harbor’s 135 new, highest quality rooms, many with patios overlooking Chautauqua Lake, with deluxe accommodations ranging from standard to luxury and master suites.

The Chautauqua Harbor Hotel seems to be more than a business venture for partners David Hart and Peter Krog.

“We didn’t want to let the Labor Day weekend to go by without at least unveiling some of it for the public,” David Hart, CEO of Hart Hotels, told the Gazette last Thursday at Chautauqua Harbor’s soft opening.

Keeping that commitment for future guests, the hotel will also employ a full-time concierge on duty every day of the week. If people ask ‘What’s there to do?’ the concierge will know all about it. We want people to know all about what this wonderful region has to offer,” Hart said.

“I grew up in the hospitality business,” Hard explained. “After college I worked in a hotel kitchen, the banquet department, the front desk, waiting tables and tending bar. So I learned the hospitality side of the hotel industry by doing it. There is a certain allure to that. It’s like show business, you work hard so that every else can have fun.” He learned the rest of the business from his father, William Hart, a successful hotel builder in Western New York since the 1960s. Hart’s three sisters learned the family business as well, remaining part of it now with their brother David.

“I have always liked Jamestown very much,” added Peter Krog, CEO of The Krog Group, long-time friend and partner with Hart in the $38 million Chautauqua Harbor project and the rest of their harbor hotel chain.

Krog lived and worked in Jamestown early in his career at a local architectural firm. He later developed and built many well-known Jamestown area sites, including JAMA, Western New York Urology, the Wegmans/Kmart Plaza, and the B&B Building which Krog’s company still owns.

“Peter and I purchased the site together and then we formed Chautauqua Harbor Hotel LLC.,” Hart said. “We like to take a vacant piece of dirt and then make it into what you see now. We immediately started using the area’s sub-contractors and many, many local companies throughout Chautauqua County for steel, paving, electrical work and a lot more. We’re thankful for the high quality of work and the great people we’ve met.”

Open all year, Chautauqua Harbor will continue to provide full-time employment. The hotel will require more than 100 local residents to work the peak seasons, and seasonally adjusted levels year-round.

In Their Own Words

Hart and Krog describe Chautauqua Harbor Hotel as evoking “…the spirit of the grand hotels of yesteryear while offering a full complement of modern amenities for today’s most discerning leisure and business travelers.”

The design features include “…an Arts and Crafts style façade highlighted with rustic stone accents, a lobby with a soaring ceiling, inviting seating areas, and oversized windows that frame the grounds and shoreline beyond.

The guestrooms are “…appointed with wood floors, luxurious bedding, plush bathrobes, green amenities, and in-room refrigerators. A complimentary morning coffee and tea bar are provided on every floor.

Guests are treated to, “… a nightly turn-down service, bellman and concierge service and a business center.

Open for breakfast, lunch and dinner daily, the Lakehouse Tap and Grille offers waterfront dining and cocktails for hotel guests and area residents alike. In season, the action spills outside to the lively Carousel Bar.

Book events, rooms and learn more about what the new Chautauqua Harbor Hotel has to offer, simply go there: 10 Dunham Avenue, Celoron, NY 14720, call (716) 489-2800 or log on to https://www.thechautauquaharborhotel.com/.

An Evening of Books and Wine

Manufacturing in Jamestown: Today and Beyond