“The history of sports in Chautauqua County is just about off the charts,” Randy Anderson told the Gazette last week with special enthusiasm. Anderson, president of the Chautauqua County Sports Hall of Fame (CSHOF), added, “We can be very proud of so many outstanding athletes, coaches, and teams all across our region. That’s why selecting Hall of Fame inductees is the hardest thing we do! It’s the thing we take most seriously.”

“I give special credit to the teachers and coaches in our local schools, too, for the way they teach young people how to both win and lose and to work hard for every opportunity. They don’t only teach sports. They each their athletes how to live their best life.”

Chautauqua Sports Hall of Fame proudly presents its new inductees to the public every year in support of its mission: To honor and preserve the sports history of Chautauqua County. 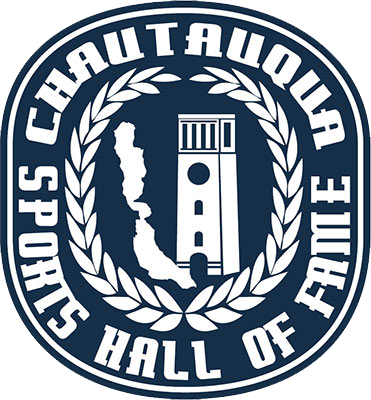 Eleven more outstanding Chautauqua Sports Hall of Fame inductees were originally announced a year ago, but the induction and the popular annual banquet were postponed due to COVID-19 restrictions and an abundance of caution. The 2022 induction ceremony will be the fortieth annual induction banquet, all consecutive but for 2021.

As a result, the Class of 2021 will now be the Class of 2022 inducted on Presidents’ Day, Monday, February 21, 2022, at the Lakewood Rod and Gun Club. All inductees have roots in Chautauqua County and many have achieved fame and notoriety nationally in their chosen sport.

These eleven new inductees will bring the total number of CSHOF’s honorees to two hundred and twenty, yet even these barely scratch the surface of notables in the world of sports worthy of future induction, according to Anderson.

Across the Sporting Spectrum

Also to be recognized will be the six county high school football players elected this season to the New York State First Team All Stars.

Most impressive about CSHOF is the wide diversity of athletic endeavor represented. The range of sports enjoyed by athletes and spectators alike in Chautauqua County is wide, featuring not only the athletes, but also their coaches, school and team administrators, officials on the field, and media personalities in both mainstream sports and others hardly visible in the county. Even martial arts, roller skating, sailing, weight lifting, horseshoes, and motorcycle racing are all featured.

All nominations for Hall of Fame inductees come from the public, according to Anderson. In order to submit a name, a nominee must have been born or lived in and achieved success in Chautauqua County. Extensive documentation to support the nominee is key to approval. CSHOF has a thirty-member volunteer Board of Trustees who evaluate and vote on the candidates.

Anderson is clear that such a size might sound a bit unwieldly, but says it allows for representation from the entire county and the opportunity for less visible sports to be included. Currently, more than one hundred nominations are on file.

Each year the board splits to evaluate the nominations until they are winnowed down to a manageable number to be voted on. Nominations which not selected in each voting cycle remain on file.

Credit for the conception and creation of CSHOF belongs most directly to retired Jamestown Director of Parks and Recreation, Russ Diethrick. Russ has been involved in the sports culture of the county, particularly baseball, from his teenage years both as player and promoter of a succession of city and county leagues and of Jamestown’s semi-professional and collegiate-league baseball teams.

Diethrick currently serves as president of the board of the Jamestown Tarp Skunks. The stadium on the JCC campus bears his name. For years Russ had imagined a museum to preserve Chautauqua County sports history.

Having repeatedly broached the subject with other interested parties, in December 1980 he convened a meeting at the Fenton Museum to discuss the matter. The following year CSHOF was incorporated as a nonprofit 501c3 organization, In 1982 the original slate of 10 inductees was elected and announced to the public.

CSHOF is funded through memberships, corporate sponsorships, and donations from the public. Additionally, President Anderson has created a legacy endowment fund. Donations to this fund are often made by family or friends of inductees or by the inductees themselves. Contributors may sponsor a specific sport. A number of contributors are selected each year to be honored at a Legacy Award presentation at a CSHOF picnic held annually in August on Chautauqua Lake.

Diethrick, characteristically self-deprecating, is quick to share the credit for CSHOF’s success. That CSHOF is flourishing after forty years, Diethrich says, is testament to the dedication and enthusiasm of its founders and the interest of succeeding generations of Chautauquans.

To those who have contributed to the success of CSHOF he offers this praise: “You have made the dream come true.”

To learn more, visit the Hall of Fame’s treasure trove of exhibits and memorabilia in downtown Jamestown, 15 W 3rd St, Monday through Friday, 12:00-3:00p.m. The Hall of Fame is free and open to the public. In person tours, conducted by Randy Anderson, may be scheduled off hours. Call (716) 484-2272 to know more. It is also possible to log on to their fascinating and detailed website (www.chautauquasportshalloffame.org) for a virtual tour conducted by Dave Mariotti.