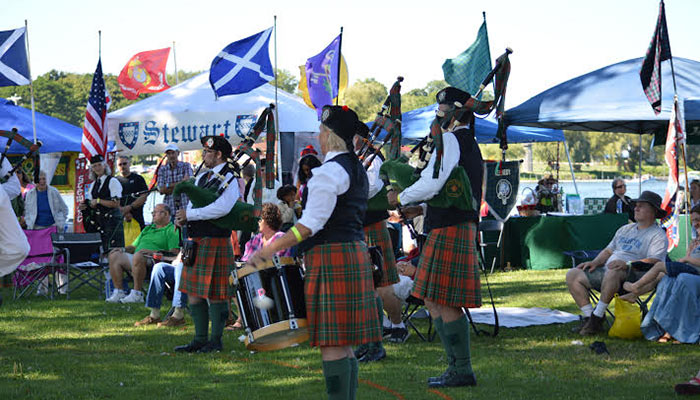 This weekend 10 pipe bands, nine Celtic bands, and 28 clans march into Mayville Lakeside Park to share their Celtic heritage along the shore of Chautauqua Lake.

The 96th Highlanders Pipes and Drums has hosted, sponsored and fundraised for the Jamestown Regional Celtic Festival and Gathering of the Clans for 11 years under the direction of Doug Clark, Business Manager and drummer. The Highlanders represents Jamestown, but has members from all over the Western New York and North Eastern Pennsylvania areas.

Friday Night Bash
Ceilidh (pronounced kay-lee) is a Celtic word for a celebratory gathering that includes music, dancing, food, and other festivities. Start the weekend right with a welcome ceilidh on the evening of August 26: the festival’s free entry Kickoff Party.

“The clans and some of the vendors and pipe bands come in, and we just get together and have a party,” Clark, coordinator of the festival, said. Stop by any time after 7 p.m. to enjoy Celtic music, food and beverages by the lake.

Celtic and Pipe Bands
This year’s ceilidh focuses on Celtic music. Multiple tents and stages are scattered throughout the park, and at least three bands play at any given time throughout the day on Saturday. “We have 10 pipe bands, which is six more in one day than any festival within a one- to two-hundred-mile radius of Jamestown. We have three different sets of Celtic groups playing all day long.

“Every 20 minutes a new band [starts to] play a 30-minute set,” Clark said. Bands work together to create a seamless flow of music: “as one [band] marches out of the circle another one marches in,” Clark said. Clark himself is an experienced drummer — he has played in concert, marching, and pipe bands — and has been drumming with the 96th Highlanders for 14 years.

A massed band composed of all the performers will play after the last morning set and again at the end of the day. “It’s pretty awesome to see a few hundred pipers and drummers playing together,” Clark said.

The variety of bands in attendance ensures that listeners will experience a full array of sounds. “Celtic bands have everything from guitars to bagpipes to whistles,” Clark said. “Some bands have been with us for over 10 years, and we have new bands coming this year.”

“The Highland Games is a unique set of athletic events sharing their origin with modern-day shot put, discus throw, as well as other sports and even some kinds of traditional dancing. It’s co-ed from amateur up to master’s level, so we have men and women throwing in the same events,” Clark said. Competitors participate in six events:

Nick Kahanic, a Falconer native, holds the world record in the Open Stone Throw. “I love the Open Stone, but it takes a lot of time, work and dedication to be on that level. You can’t just be good at one thing in the Highland Games,” Kahanic said.

This will be Kahanic’s 10th year competing at the Celtic Festival, and he looks forward to returning to the place where he won his first Highland Games event.

“We have multiple athletes who are in the top 10, worldwide, in their age groups,” Kahnic said. Come see Kahanic and a combination of talented amateurs and masters compete in all six events on Saturday.

Other Activities
The Celtic festival attracts people from all walks of life, and, as such, engages all five senses in a variety of ways. Browse the wares of over 20 Celtic vendors while listening to one of the many pipe bands or Celtic groups. The vendors sell everything from pewter jewelry to cheese boards to kilt accessories.

The beer and wine garden will be open both Friday night and Saturday. “We’re hopefully going to have a mead, a fruity-type wine, that’s popular in the Celtic world,” Clark said. Stop by for a pint of Irish brew or a standard domestic beer, whichever tickles your taste buds.

Little Athletes
“It’s a family-oriented event,” he continued. The location gives families with young children room to roam, and re-entry to the festival throughout the day is encouraged. Admission for children under 13 is free. There will be face painting and photo cutouts of the Loch Ness monster, castles, and other Celtic scenes for smiling faces to pose behind.

Children can participate in a smaller version of the Highland Games. “We have a kid’s corner with mini cabers and stones for them to throw. We give all the kids medals and ribbons for participating,” Clark said. The hand-painted mini cabers and lighter stones give kids an opportunity to compete in a friendly environment while learning about traditional Highland Games.

Claim a Clan
Representatives from 28 clans will be present at this year’s festival, and many are genealogy experts. They spend time documenting and keeping track of Celtic heritage and history. Even people in possession of non-Celtic names may be surprised to find that their ancestors were, in fact, members of a Celtic clan. “There are a lot of people who come here and leave as a clan member,” Clark said.

Looking Forward
“When we first started out it was just local people. Barely 800 people came, but we’ve broadened out and now we get people from the Celtic Festival circuit,” Clark said. In past years over 4,500 people attended. Clark’s staggering $46,000 budget is replenished by ticket sales, which keep the festival running on a yearly basis. The festival is run entirely on volunteer power: all money brought in goes toward next year’s festival.

A Scottish auction, similar to a Chinese auction, offers items donated by individuals and businesses. Proceeds from Scottish auction funds go to a scholarship at the Chautauqua Region Community Foundation. The 96th Highlanders Scholarship Fund has given eight scholarships so far, and raises an average of $2,000 per year.

Stop by for the Festivities
“I love the overall atmosphere of the festival. The lake setting is perfect,” Clark said.

Head up to the northern end of Chautauqua Lake to Mayville Lakeside Park this weekend to experience the Jamestown Regional Celtic Festival and Gathering of the Clans.

The festival begins Friday, August 26 at 7 p.m., and starts back up at 9 a.m. the following morning, Saturday, August 27. The suggested donation on Saturday is $10 for adults and $8 for seniors. “Rain or shine, it’s on,” Clark asserted.

“People should definitely come out to the festival this year. There will be good music, world-class athletes and vendors with everything from high-end whisky glasses to amazing chicken barbecue,” Kahanic said.

For a full list of bands, performances and vendors, as well as an event schedule, visit 96thhighlanders.com or see the Facebook event page, titled Jamestown Regional Celtic Festival and Gathering of Clans.