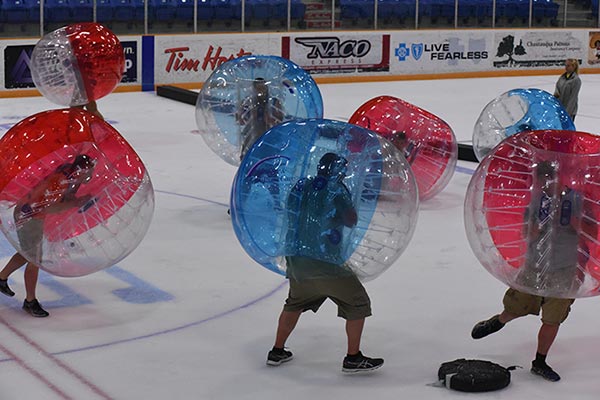 Jamestown’s Northwest Arena will host the second Annual Bubbleball Hockey Tournament on Saturday, March 10,with the championship game to be played during the Southern Tier Xpress Game on Sunday, March 11. Proceeds from the event will benefit Chautauqua Hospice and Palliative Care.

Bubble Ball sports are a new phenomenon gaining popularity throughout the United States. Team members will wear large, transparent inflatable plastic bubbles while they play, making movement on the ice much more fun and interesting. Players bump into each other and bounce around the rink in a battle to be the Bubble Ball Hockey Champions. No skates or hockey sticks are allowed; players wear sneakers and score by kicking a large puck into an untended goal.

Bubble Ball is a great spectator event. The public is invited to witness the action, which is fast-paced and entertaining.

“Bubbleball Hockey is great fun and allows Chautauqua Hospice & Palliative Care to connect in a fun way with a folks we might not otherwise have a chance to engage,” said Shauna Anderson President & CEO of CHPC. “We hope the community comes out to support our mission and have a very entertaining afternoon!”

Doors open at 12pm and the games begin at 1pm. The tournament will be organized in a double elimination format ensuring that each team will play at least two games. For games ending in a tied score, the winning team will be the one raising the most sponsorships.

Prizes will be given for the first, second and third place teams, most creative team name and best team T-shirt design. The team raising the most sponsorship contributions for CHPC over $100.00 will win a prize and be chosen as winner if they tie one of their matches.

There will also be a vendor fair taking place on the walking track around the ice rink on Saturday and Sunday during the Southern Tier Xpress Hockey game. Vendor space is still available on a first-come basis.

Questions about the tournament or vendor opportunities should be directed to BJ Buonaiuto, CHPC Events Coordinator, at bjb@chpc.care or (716) 410-1802.

The mission of Chautauqua Hospice & Palliative Care is to provide end of life education and care in Chautauqua County. CHPC provides hospice care for patients and families facing life-limiting terminal illness, palliative care for those with serious chronic illness, and bereavement support to individuals, families and organizations who have suffered the loss of a loved one. For more information, visit www.chpc.care or call (716) 338-0033.