“Why won’t they let her go?” asked JHS senior, Brianna Bommireddipalli, shaking her head at the Poetry Out Loud judges to win first place in the Western New York Regional competition held in Brockport on February 12th. Now, she’s heading to New York City for the State Finals, where she will compete against twenty-three other regional poetry winners.

In December, Bommireddipalli was one of 20 JHS students who recited poems before an independent panel of judges in the JHS auditorium. The students were evaluated on their physical presence, voice and articulation, dramatic appropriateness, evidence of understanding, and accuracy during their poetry recitation, and the competition was stiff.

The two JHS winners of that contest, Abby Beach and Brianna Bommireddipalli, traveled to SUNY Brockport to compete against other western New York high school winners. Brianna won the competition with her recitation of three poems: “Friendship After Love” by Ella Wheeler Wilcox, “Trace Evidence” by Charif Shanahan, and “Little Girl” by Tami Haaland.

I’ve always been interested in poetry but never had an opportunity like this,” remarked Brianna. “With the help of Mrs. Price, I was able to really believe in myself and do something out of my comfort zone. It has been my best decision yet!”

On March 6, Brianna will travel to New York City with JHS English/ Public Speaking teacher, Barbi Price, to compete for the New York State Poetry Out Loud title. The winner of the New York State contest will then proceed to the National Finals at George Washington University in Washington DC, where the winner receives $20,000.

“Brianna chose poems that showcase the range of her abilities, ” said Mrs. Price. “She articulated beautifully and performed with maturity and confidence. She enthralled the audience with her recitations.”

Bommireddipalli added, “It was an extremely humbling experience but one which I enjoyed. Although I was absolutely terrified and shaking, I was also filled with excitement to be able to replay exactly what I had been practicing for several months. I am looking forward to competing in NYC.”

The National Endowment for the Arts and the Poetry Foundation partner with state arts agencies to create Poetry Out Loud, a program that invites the dynamic aspects of poetry and the spoken word into JHS English classes. Poetry Out Loud helps students master public speaking skills, build self- confidence, and learn about their literary heritage. 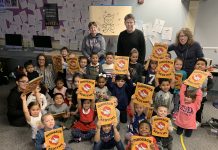