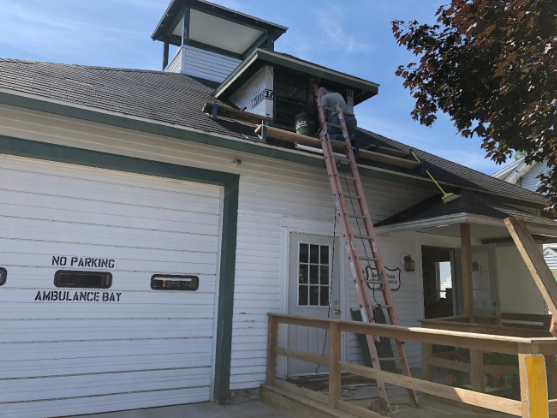 The Bemus Point Historical Society has commenced renovations to its museum in Bemus Point. After extensive planning and fundraising, officers and trustees of the organization set forth several goals to correct deficiencies in their Alburtus Avenue building and enhance the appearance of the museum. The society has previously made changes and upgrades to the building including: renovation of the front porch and a portion of the rear of the facility, addition of a wheelchair accessible ramp, and replacing the aging furnace with a newer, more efficient model. Funding for some of those improvements was secured through a grant from the Chautauqua Region Community Foundation.

The repairs currently being undertaken were necessitated by rain water infiltrating through a dormer on the front of the building which also affected the ceiling on the building’s main floor. Money for the work was solicited as part of a fundraising effort undertaken by the society. Members and friends of the local museum donated much of the money needed for the planned renovations to date, and donations are still being accepted toward those improvements. Funds raised will also be used to purchase archival boxes and appropriate containers for artifacts in storage at the museum as well as to digitize and reproduce an original map of the Bemus Point Village Cemetery which was donated by the John Cheney Family. Archival glass for that large map was generously donated by Mike Latone of D&S Glass in Jamestown. The frame was fabricated and donated by Fletcher Ward.

Planned renovations under consideration for the building include the replacement of the original, double hung windows on the side of the building with shorter and higher windows. That change will further improve energy conservation, enhance security, and increase the museum’s display space. Also under consideration are plans for further upgrades to the building which will better reflect the history of the Village of Bemus Point as well as the purpose of the museum.

Further Information on the Bemus Point Historical Society or the museum can be obtained from Robert Terreberry, Cherrie Clark, Town of Ellery Historian, or Fletcher Ward.