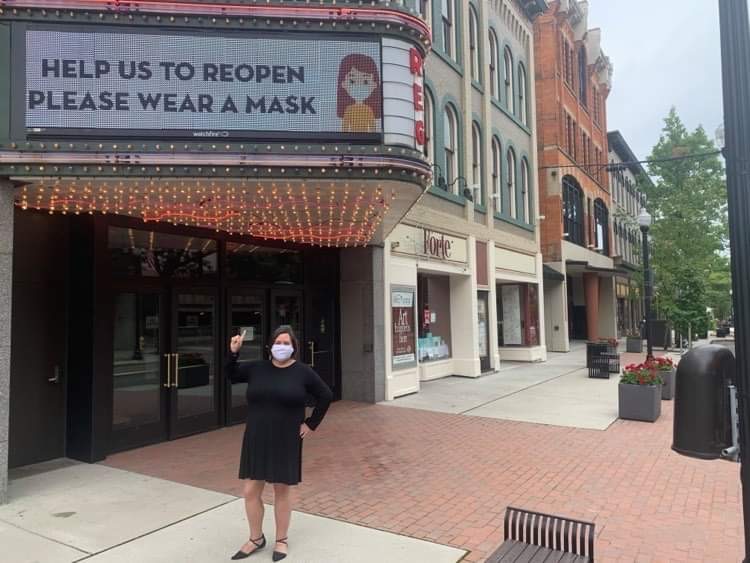 “We miss our patrons and friends,” said Hillary Meyer, the newly appointed Executive Director of the Reg Lenna Center for the Arts. Ms. Meyer began her new role on July 1, 2020. She has been with the Reg since 2011. She was the Business Manager prior to being appointed the Interim Executive Director last October after the departure of Kathleen Eades. Ms. Meyer holds a Bachelor of Science degree in Film & Video Production from the Rochester Institute of Technology. She has worked as a production accountant while working in the film and television industry in New York City. She worked on such films as Eternal Sunshine of the Spotless Mind, Kinsey, My Super Ex-Girlfriend, and TV series Mad Men and Remember WENN.

The Reg Lenna Center for the Arts, located between Pine and Spring Streets on E. Third St. in Jamestown, is the anchor for the east side of the downtown corridor. It is comprised of several buildings that serve as the heart of the arts and cultural district. In a normal year, “the Reg showcases a wide variety of events including live concerts, movies, ballet, orchestras, gallery shows and more,” according to the website, www.reglenna.com. The centerpiece of “The Reg” is the 1923 restored 1,165 seat historic theater. The complex includes a multi-media arts studio, pre-function event space, Bill’s Place which is home of the 1878 Buffalo Bill Billboard that was found on the exterior of the building, the 3rd On 3rd Art Gallery and WRFA-LP 107.9 FM low power community radio station. The mission of the Reg is “through comprehensive programming, the Reg Lenna Center for The Arts inspires, educates, and empowers an engaged community.”

This year the WRFA radio station has been deemed essential, while the movies, events and gallery shows have been put on hold. “Theaters are the sole holdout of New York State’s phase 4 reopening plans. We are ready to open as soon as we get the green light. The correct HVAC filters are installed, we are set up with hand sanitizers and for hydrostatic disinfecting. The theater is set up for social distancing and most likely we will only be allowed 25% capacity, so there is plenty of room for movies and other smaller events,” said Ms. Meyer, “currently we are hosting Quaran-Streaming. You can download foreign films, documentaries, smaller comedies, etc. from our website and Facebook page to watch in your home. There is a small fee and we get a portion of that fee.” She went on to add, “when we open, we will offer movies in the theater through the end of the year. Patrons can watch from their homes as well. We understand everyone needs to be comfortable, so if that means staying home, we want to help it be more fun.”

During the shutdown, the new Executive concentrated on funding needs. She successfully brought in grants and loans for staff costs and COVOD crisis support from the Paycheck Protection Program, Chautauqua County Crisis Response Fund, Arts Services Initiative of WNY and Corporation for Public Broadcasting. While some staff was laid off, others focused on deferred maintenance. “We had time to do it now,” said Meyer.

“We are working with our community partners to let them know we have a state-of-the-art multimedia studio where they can video stream events, meetings, whatever they need to do. They can do a podcast, a comedy standup routine, dance recital, whatever they want to share with their staff, patrons, friends, etc.,” Ms. Meyer added.

Coming up, WRFA will be hosting live streaming of the local political debates. “It’s a great way to get to know the candidates,” said Ms. Meyer, “and on September 1, we were part of the nationwide #RedAlertRESTART campaign to bring theater funding to light to our representatives in government. Nationally live events employ over 12 million people and contribute over $1 trillion annually to the U.S. economy. This year 95% of live events have been cancelled due to COVID-19. Our colleagues need the government to continue to support the unemployment insurance payments until everyone is back to work.”

At this time Ms. Meyer and the staff have moved the 2020 events to the 2021 season. “We are hopeful we will be back to a normal schedule next year,” she said. And once again, art will happen here, at the beautiful Reg Lenna Center for the Arts.