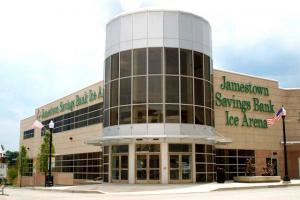 JAMESTOWN –  The Progressive Skating & Gymnastics Spectacular taking place at the Jamestown Savings Bank Arena on Saturday December 15 is sold out. A limited number of tickets may be released at a later date, check the Arena website at www.jamestownarena.com for updates.

This show will feature 2012 all around Gold medalist Gabby Douglas along with other 2012 Olympic competitors; Aly Raisman, Jordyn Wieber, John Orozco, Danell Leyva, Jonathan Horton and Jake Dalton. The cast of gymnasts will include the 2008 all around gold medalist, Nastia Liukin.

Performing live during the show will also be Fresh Beat Band of Nickelodeon’s “Fresh Beat Band” and Ross Lynch of Disney’s “Austin and Ally,” with his band R5.

Please call 716-484-2624 or visit jamestownarena.com for further information. Also, check us out on facebook at www.facebook.com/JamestownSavingsBankArena and twitter at twitter.com/JamestownArena.