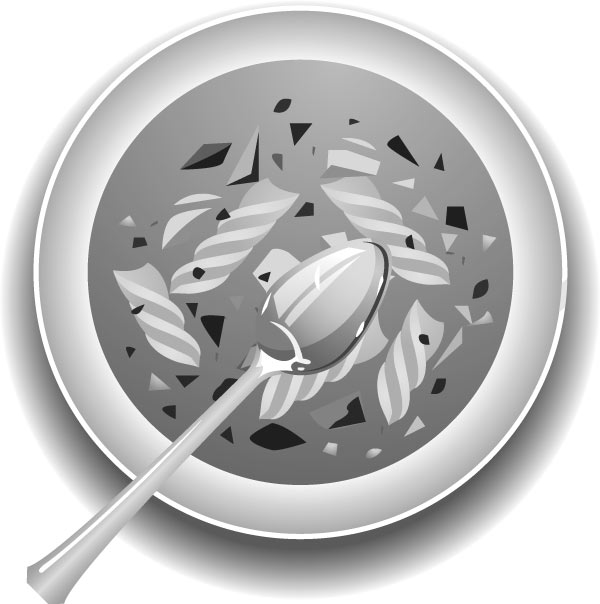 The first part of that phrase has moved from a TV ad into everyday talk. Anything that is “quick, easy, and done,” is said to be a Shake-n-Bake kind of thing. Instant foods, instant Friends on Facebook, and one-stop-shopping are all shake-n-bake.
The tag-line was the best part. “…and, I helped!”
In the TV ads, happy, excited children helped their mothers and then enthusiastically told everybody that they had a helping hand in the job.
We’re all still kids like that, aren’t we? We love to be part of something good, part of making it happen, part of a thing everybody else will love.
And this week we find out that it can all happen in a big bowl of good, hot soup. There’s an old Vaudeville gag that says it best:
Bobby: “Join me in a bowl of soup?”
Nobby: “Sure, if there’s room in the for both of us.”
This week, your Jamestown Gazette invites everybody in town to join us in a big bowl of soup. Best of all, it’s a big enough bowl for everybody. It’s a “Souper Bowl.”
Our contributing front page writer for this week, Megan Barone, the director of development for UPMC Chautauqua and the WCA Foundation, tells us about a quick, easy and very tasty way to be able to say, “…and I helped!”
Fresh Prince comic Will Smith, said that if you can help, it’s like this: “If you’re not making someone else’s life better, then you’re wasting your time. Your life will become better by making other lives better.”
Some of Jamestown’s best chefs and cooks, eateries and caterers, will be helping by cooking up their very best good-stuff for us to sample and savor. But best of all, it is all in a good cause. The price of all those bowls of soup will give you a hand in helping with the winning-battle against breast cancer. Overall, cancer rates have dropped by 26 percent in the last 20 years, and breast cancer – which men can get, too – has fallen by an amazing 39 percent since 1989.
So, when you join us in that bowl of soup this week, you’ll be treated to the best the city has to offer. You can say with us, “…and I helped!”
We don’t know if you’ll dive into Wisconsin beer soup with lots of cheese, Mexican Menudo soup – said to have the power to cure a hangover, or Tanzanian Supu Soup (a traditional luxury) made from every part of a cow nobody ever eats, but we’re sure Jamestown’s Souper Cooks are each cooking up something very tasty and special. Vote for the most Souper soup in town. It’s a “shake-n-bake” way to help. Quick, easy, and very tasty.
Enjoy the eats, and enjoy the read. I helped, too.
Walt Pickut

Summer is a Giving Time