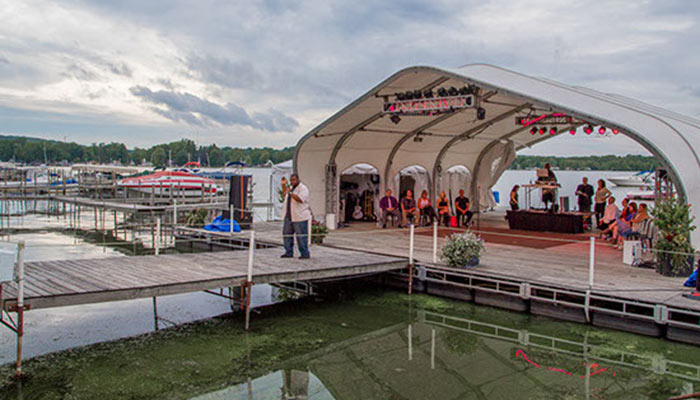 2017 marks the celebration of 20 years of world-class musicians and unforgettable memories spent at the Bemus Bay Pops. The Bemus Bay Pops offers exceptional entertainment on Chautauqua Lake for local residents or visitors enjoying summer. This year is also the 35th anniversary of the Italian Fisherman at 61 Lakeside Drive in the center of downtown Bemus Point.

The Birth of the Pops
It all started 20 years ago on the back deck of the Italian Fisherman, where a special CD release party was being held for local musician Steve Swanson. Swanson was a dear friend of the Dalpras, who has since passed away in 2016. While Dan was watching everyone have a great time, an idea began to form as he looked upon his rooftop. “Right at that moment it struck me that, ‘My gosh, wouldn’t it be great to put a symphony orchestra up there?’” Dan said. “We could host a big event for everybody at the end of summer and bring the people a beautiful, free concert doing popular music with a symphony orchestra.” And so the Bemus Bay Pops was born.

After reaching out to Swanson, they put the event together within six to eight weeks. They reached out to John Marcellus from the Eastman School of Music to be the Conductor. Despite controversial doubts about the practicality of the concert from the community, the 40-piece orchestra performed on top of the roof with great success. “It turned out to be a spectacular evening,” Dan said. “People referred to it as ‘an evening in Camelot.’ It was just breathtaking. We had a beautiful sunset, the orchestra played, and people became emotional with it.”

Four years later, the Dalpras found significant sponsors to make the floating stage possible and created a non-profit organization. “The Pops has grown into a destination now and it’s become not only culturally but economically a force that has driven great things in the region,” Dalpra said. “Not just Bemus Point, but the entire region truly benefits from it in terms of growth and bringing the arts to people. That’s been our mantra.”

Economic Impact
Roughly 1,000 people attended the first year, which turned into 5,000 people the second year. The Bemus Bay Pops has grown to generate more than $15 million in economic development annually for the whole region. This money supports hundreds of full-time equivalent jobs, millions in household income to local residents, and provides nearly $2.4 million in local and state government revenue.

The Pops provides an economic boost to the Bemus Point area due to the many jobs added and number of residents and tourists alike coming to see the shows. Many people invite their friends to enjoy the event, which leads to more rentals and buying of property.

“We were looking for new ways to stimulate and generate new activity, and the Pops really opened the door up for something completely new,” Dan said. “It brought Bemus Point to the forefront in terms of drawing lots of people, which stimulated a lot of other people to look and say, ‘Wow, I think I’ll open a business, rent a house, buy a house,’ so a lot of economic stimulation happened in this area because of having this great program.”

Don’t Miss the Fun
This week is the last chance to enjoy the lake while experiencing Lake Night at the Movies. The 2015 film The Martian will feature the story of an astronaut who becomes stranded on Mars and how he uses his resourcefulness to signal to Earth that he is alive. This science fiction movie will be shown at dusk August 15 on the big screen of the floating stage.

Two upcoming shows include the Motown Tribute band, Shadows of the 60s and the Bob Seger Tribute band, Hollywood Nights. Shadows of the 60s will pay tribute to The Four Tops, Temptations & Supremes at 8:00 p.m. on August 19. Three groups will perform on stage and the grand finale features music from Motown’s Smokey Robinson, Marvin Gaye, Stevie Wonder, Gladys Knight, and more. Hollywood Nights will pay a special tribute to Bob Seger and The Silver Bullet band at 2:30 p.m. on August 20.

“It’s really important for people to understand it’s more than just concerts – it’s culturally educated a lot of people who maybe didn’t go to Chautauqua or have the resources to have exposure to some pretty cool things that I think have influenced people to perhaps seek a career or take an interest in music and the arts,” Dan said. “The arts is very profound when it comes to development of a community.”

For more information including event schedule and tickets, visit http://www.bemusbaypops.com or call 716-969-3989.