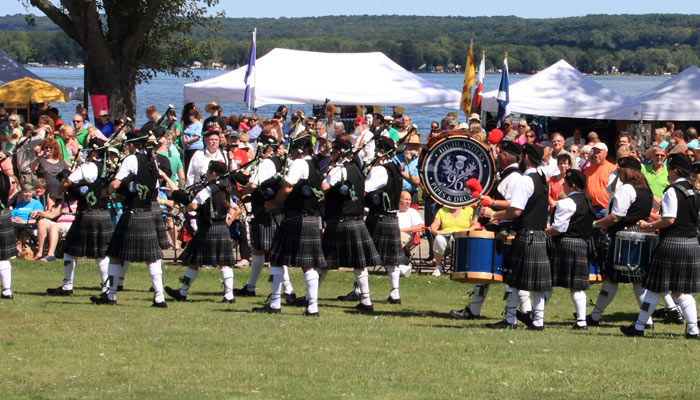 Bagpipes, Dancing, and Competition
The pipe bands range from a level five (the beginning level) to a grade one level and a pro-class level (the highest level). The pipe bands coming to the Celtic Festival will range from a level two to a five. Three pipe bands are traveling from Ohio: The Great Lakes Pipe Band, The Caledonian Pipe Band and the 87th Cleveland Pipe Band. The Great Lakes Pipe Band is a level two band. “They’re really one of the best,” said Doug Clark, coordinator of the Celtic Festival.

The Scottish Heavy Athletes compete in six events: The open stone throw, weight throw for distance, Scottish hammer throw, sheaf toss, weight toss for height and caber toss. For the caber toss, athletes carry a 16 to 20 foot caber weighing an impressive 120 pounds. They pick up the massive poles from the ground while balancing them upright, and flip the poles over so the opposite end hits the ground before falling over. Athletes throw a 56-pound weight for the distance and height events. A flaming caber is tossed at the beginning of the festival to emphasize the significance of the celebration’s opening moments.

What’s New?
This year a demo of stronghold Scottish wrestling will take to the ring in the traditional Greco-Roman style. “When people see we’re going to have wrestling at the festival it’s not WWE, it’s actual Greco-Roman wrestling like they do in high school, college,” Clark said. Greco-Roman is the “real wrestling” of history and as proposed for the upcoming 2020 Olympics. The wrestling event at the festival will be brought back next year as a competition instead of a demo.

Each year the festival features a Scottish auction tent, similar to a Chinese auction. People can buy tickets to put in a raffle in order to win items donated by businesses and vendors. A Celtic woodcarving made with a chainsaw will be available to bid on. The maker has begun crafting the piece at home and will finish carving it as an attraction at the festival.

In the Beginning
Clark and former Jamestown Police Chief William MacLaughlin founded the festival in 2005. “It’s grown to be bigger and better,” Clark said. The festival started out as a small event located behind JCC with approximately four clans, four pipe bands and six vendors. A $6,000 budget has significantly grown to a whopping $46,000 budget. Money comes from donations given by individuals, businesses and ticket sales.

Clark and MacLaughlin started the festival because there aren’t any Celtic festivals in this immediate area. “Every year you have a Scandinavian festival, an Italian festival, a Greek festival, so we thought, there’s not a Scottish or Irish festival, and we wanted to have a Celtic festival which incorporates all of the seven recognized Celtic nations,” Clark said.

Supporting Education
Money raised through the auction and carving will go into the 96 Highland Scholarship Fund set up through the Chautauqua Region Community Foundation. The scholarship is for students in Chautauqua County who plan on going to college for music. “When we started the festival my main purpose of doing it was to generate income so we can give out scholarships,” Clark said. It took six years to reach the point where they could make that vision possible.

Special Names
Small Celtic clans at the festival consist of parents and children, with succeeding offspring becoming a part of the clan. Each clan holds a surname, and other surnames fall under that surname as well. The family names can be traced back through 300 or more years of history in most cases. Examples of the clan names include Gunn, Turnbull, Kennedy and Claus. Each recognized clan is certified in Scotland.

“We’ll start the festivals next weekend and two weeks after the festival we’ll have a shakedown meeting about what worked and what needs to be changed,” Clark said. The event takes all year to prepare. The Celtic Festival is run solely by volunteers, so all of the money raised supports only future festivals and the scholarship fund.

The Celtic Festival is still looking for volunteers! Anyone interested in volunteering can call (814) 323-7360 or visit http://96thhighlanders.com to sign up. Shifts will last four hours and volunteers receive free entrance to the festival and food.